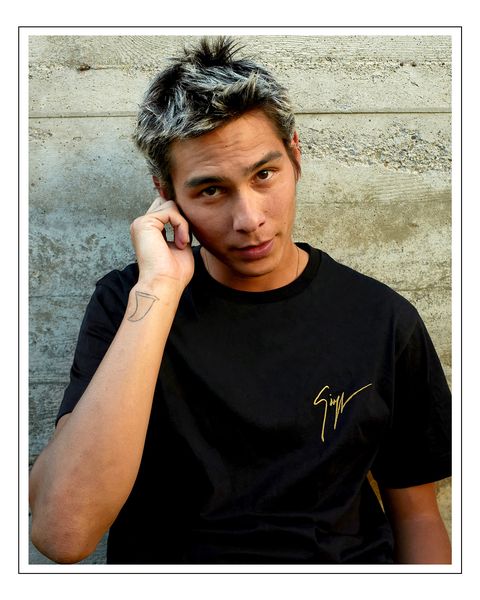 For many of us lucky ones, lockdown has only meant putting on a mask, adapting to different ways of working, and foregoing the requirement of dressing for others. For Italian footwear designer Giuseppe Zanotti, the two-month spring lockdown in his hometown of San Mauro Pascoli where his manufacturing is also based, turned WFH into a burst of creativity. Zanotti set up a series of Instagram live links from his home studio with friends Evan Ross, Julia Fox, and Neelofa, in which they dove deep into a mutual love of shoe design. But Zanotti also spent time developing a small capsule line of upscale loungewear he called “Living Room,” that launches today with T-shirts (the rest of the line follows later this month). To showcase the capsule he shipped it to California to another friend: surfer, skater, and model Evan Mock.

“I originally met Giuseppe in Milan,” says Mock, “and he was super cool to me. Taking me around the showroom showing me all the new shoes. I was just chatting it up with him a lot. He was just introducing me to everyone. I was like, ‘This guy’s the sickest,’ so we just kind of kept up a relationship after that.”

Mock, from Hawaii’s North Shore, who has been signed as a model since he was 19 (he’s currently with The Jeffries), got a monster boost of celebrity in 2019 when he chopped off his surfer locks on a whim and dyed the resulting buzz cut neon pink, catching the eye in the process of Frank Ocean. Ocean posted a video on his feed the next day of Mock skating. Exponential growth in followers (now over 400K) led to modeling gigs for Saint Laurent and Louis Vuitton, front row seats at numerous fashion shows, and eventually into Zanotti’s orbit.

“‘Living Room’” is a loungewear capsule collection made of the best quality materials, and with zipper elements which are part of my DNA,” Zanotti says. “During the lockdown, we were all wearing tracksuits and comfy clothes, so I thought of experimenting with something new, and Evan was the perfect, cool guy to embody my vision.” 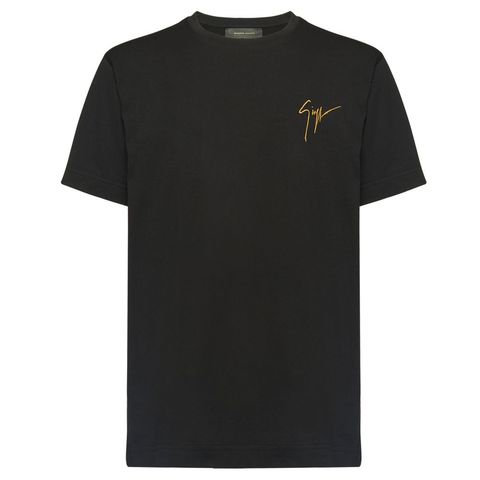 Hunkered down in Laguna Beach, California, and with his signature pink hair grown out in favor of flashes of bleach blond, Mock got into the collection and had his brother Alika shoot the pics. “I was going to do it in a house more, but we tend to hang out around my friend’s house, in the yard and on the street,” Mock explains. “So, we ended up hanging out for an evening and just shooting the shots there.”

The small collection is made up five pieces including a hoodie, a T-shirt, sweatpants, and two sweatshirts, and available (prices start at $250) from Giuseppe Zanotti’s online shop. It is simple in color—black, white, and gray for the tees—and minimalist in design, apart from featuring Zanotti’s signature gold zippers and scrawly logo to add a touch of luxury. The line is something of a departure for Zanotti, who is first and foremost a shoe man, but it could well pave the way—we hope—to other clothing projects.