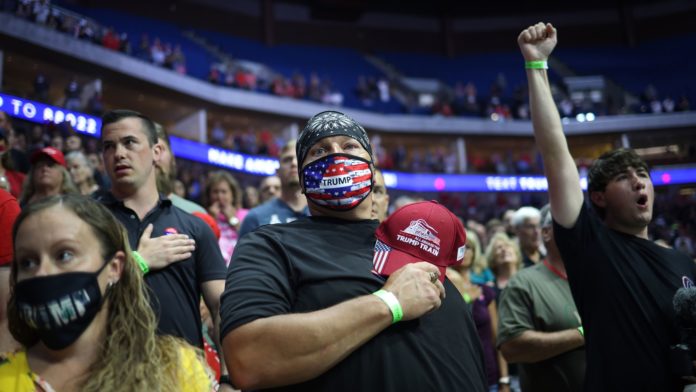 Neil Young is suing Donald Trump’s re-election campaign for copyright infringement, alleging that his music has been used at the president’s rallies without his permission.

The 74-year-old star said that he could not allow his work to be used as a “theme song for a divisive, un-American campaign of ignorance and hate”.

In a complaint filed in a New York court, Young objected to Rockin’ In The Free World and Devil’s Sidewalk being played “numerous times at rallies and political events for the entertainment and amusement of those attending”.

Young said the Trump campaign played both songs at a rally in Tulsa, Oklahoma, on 20 June, which controversially went ahead despite concerns over the ongoing coronavirus pandemic.

The lawsuit states the “campaign does not now have, and did not at the time of the Tulsa rally, have a license or Plaintiff’s permission” to play the songs at any “public political event”.

The former member of Buffalo Springfield said he has “continuously” complained about Mr Trump’s use of his songs since 2015, but he has been “willfully ignored”.

Young said his first complaint was in connection with the use of Rockin’ In The Free World at Mr Trump’s original announcement that he was running for president in June 2015.

The complaint claimed the Trump campaign “willfully proceeded” to play the songs “despite its knowledge that a license is required to do so”.

Young’s lawyers added: “This complaint is not intended to disrespect the rights and opinions of American citizens, who are free to support the candidate of their choosing.

“However, Plaintiff in good conscience cannot allow his music to be used as a ‘theme song’ for a divisive, un-American campaign of ignorance and hate.”

The Trump campaign has not yet made any comment on the lawsuit.

It comes after the Trump campaign was warned earlier this summer that it could face legal action if it continues to use songs by The Rolling Stones.

Last month, dozens of artists including Aerosmith, Green Day, Mick Jagger and Elton John signed an open letter calling on politicians to obtain permission before playing their music at rallies and events.