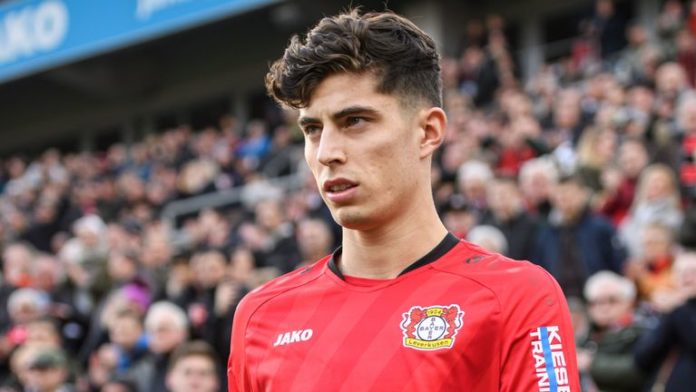 Bayer Leverkusen coach Peter Bosz insists he has no concerns over Kai Havertz’s commitment levels, vowing the Chelsea target will be the first name down on his team-sheet to face Rangers in the Europa League.

Leverkusen are holding out for £90m for the attacking midfielder, but Sky Sports understands a structured deal starting at £70m and rising to that higher figure with add-ons has been proposed.

But Bosz does not believe the 21-year-old will have his mind in London when his current employers reacquaint themselves with their Europa League rivals from Glasgow after a five-month break.

Havertz scored the opener from the spot at Ibrox as Leverkusen claimed a 3-1 first-leg lead and are now looking to finish the job at the BayArena.

“I will answer these questions very shortly,” said Bosz. “Yes, he will play and yes I’m convinced he’s 100 per cent still fighting for Leverkusen.”

While Havertz is available, Dutchman Bosz has been hit with a selection dilemma ahead of the last-16 return clash.

Paulinho will miss out after rupturing his cruciate ligament and Dutch winger Karim Bellarabi is struggling with a muscle problem.

Midfielder Nadiem Amiri is also out of the showdown with Steven Gerrard’s men, having been placed in quarantine after coming into contact with a close friend who has since tested positive for coronavirus.

To make matters worse, midfielder Kerem Demirbay and right-back Mitchell Weiser are both suspended, meaning Bosz will have to put his trust in playmaker Charles Aranguiz and left-back Wendell, despite both being just one more booking away from missing a potential quarter-final clash against Inter Milan or Getafe.

Bosz, whose side must win the competition if they want to claim a Champions League spot, said: “We can only win the tournament if we win against Rangers. It doesn’t make any sense to dream ahead to the upcoming matches.

“I’ve tried to convey this to the players that they see it that way.

“We want to progress. If I need players tomorrow who may be at risk of being suspended, they will still play. Our focus is only on progressing.”

Germany international Amiri did not feature at Ibrox and will be absent again after being told to self-isolate from his team-mates.

But Bosz said: “Something like Amiri can happen again, all of us. Nadiem reacted very well. He immediately called our doctor, while the club also responded very well.

“We have to be careful. That’s how it is with corona.”

Leverkusen have not played since their defeat to Bayern Munich in the German Cup Final on July 4.

Gerrard’s team, however, followed up an impressive pre-season campaign by kicking off the new Scottish Premiership season with victory over Aberdeen.

Bosz is taking nothing for granted, saying: “I don’t think it’s a formality at all. If a player tells me that I would blame him for saying that.

“Of course winning at Ibrox 3-1 was a great result, but it won’t be easy at all. Just look at the preparations Rangers have [been] doing.

“They kept clean sheets throughout all their pre-season friendlies so it won’t be an easy match at all on Thursday.”