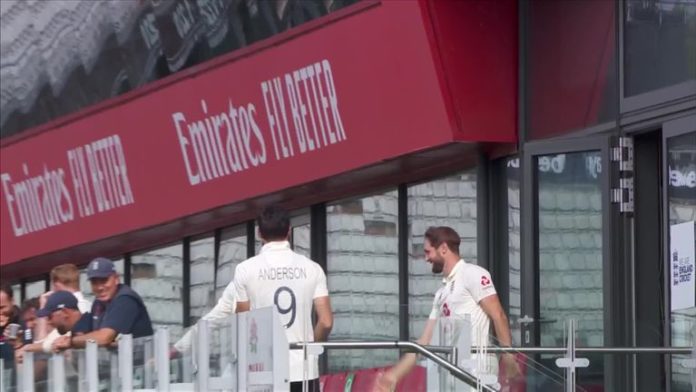 Watch live coverage of day two of the first Test from 10.30am on Thursday on Sky Sports Cricket

England put their heads together during a rain break on day one of the first Test against Pakistan to complete football’s bin challenge!

After several warm-up attempts, seven players combined to head a ball from the players’ balcony at Emirates Old Trafford into a bin at pitch level without it touching the ground.

Seamer James Anderson got things underway alongside captain Joe Root and Chris Woakes upstairs before the sequence was extended by Mark Wood, Dom Bess and Ollie Pope by the boundary boards, with Wood supplying the killer touch with a cushioned header at the end.

The ‘goal’ prompted joyous celebrations amongst the players involved as well as their team-mates and backroom staff, including head coach Chris Silverwood.

Back in January the team were banned from playing football after Rory Burns suffered a serious ankle injury during a pre-training game on the eve of the second Test in South Africa.

Live coverage of the first Test between England and Pakistan continues from 10.30am on Sky Sports Cricket on Thursday and across Sky’s digital platforms.