Home Lifestyle The 12 Best Dive Watches for Deep-Sea Adventures (or Just Wading in... 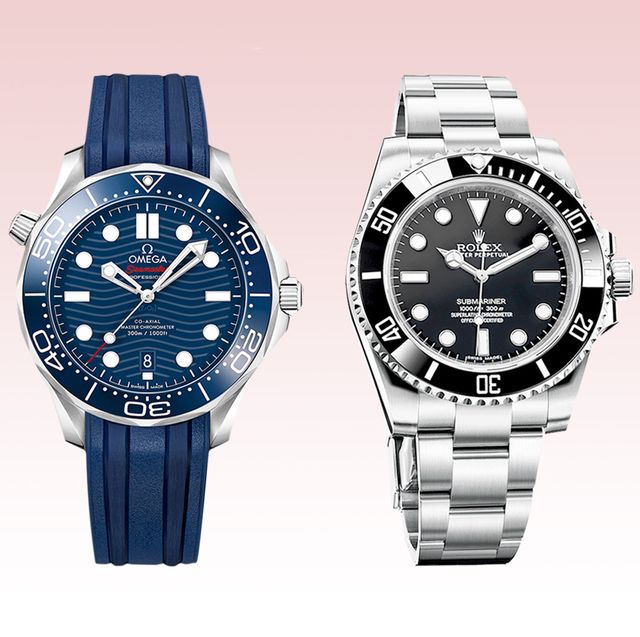 Water is the eternal nemesis of mechanical watches. Once moisture gets inside, it’s pretty much curtains. Dive watches are subjected to the most stringent tests in watchmaking because they must survive potentially life-threatening situations below the waves. If your watch passes all those tests, it’s probably going to be robust enough for you. Call it an abundance of caution, but a watch rated for a dive to 200 or 300 meters will probably not cause you any bother while you’re washing the dishes.

Not that that’s the only thing that really gets to us about dive watches. There’s also the whole mythology of the great subaquatic adventurers, post-ww2, after the aqualung became a viable tool for working (or playing) underwater. As the oceans became the new exploration zone, the watches designed for it were predicated entirely on legibility—any extra embellishment just got in the way of safety—which is why good dive watches are perhaps the best illustrations of the mantra “less is more.”

In truth, dive watches resonate best with us (thank you, James Bond) because they smell of adventure. In the 1950s they were among the first (along with pilots’ watches) to be made on a larger physical scale than traditional dress watches; more mass meant more strength to resist increased pressure underwater. More mass also made them noticeable from a distance. And of course, what they say about you from a distance is that you’re a certain type of tough. Hopefully.

One might quibble forever on what makes a great dive watch and how deep it should go, or how important a helium escape valve is when your most ambitious plunge is a belly flop off a diving board at your folks’ pool. The reality is that any serious diver these days would not strap on a scuba tank without also strapping on the kind of digital dive computers—from the likes of Suunto or Cressi—that will convey a hundred more vital things about your dive than simply what time it is. Yet tellingly, many divers still take an analog diver watch with them strapped alongside. Because, you know, just sometimes, batteries run out.

Here are 12 of the best right now.

Since Rolex invented the first waterproof watch—the Rolex Oyster—in 1926, there have been plenty of newer Rolex candidates that technically qualify as dive watches: the Submariner, the Sea Dweller, and the Sea Dweller Deep Sea to name but three illustrious ones. Rolex’s name rests on rigorous testing of materials and components, much of it by military and professional divers and subaquatic explorers working at the limits of human endurance. The Sea Dweller Deep Sea, for example, earned its name from a special prototype that in 1960 reached 35,800 feet below the surface of the ocean with the Bathyscaphe Trieste. The watch was on the outside of the craft, by the way. It rose to the surface still functioning perfectly. Direct feedback from experts in the field like this has allowed Rolex to continually improve each new generation of watches as much with functional upgrades as aesthetic ones. Both are vital to the enduring appeal of a dive watch, but if you’re searching for a thoroughbred you won’t find one more beautiful than the Submariner, introduced in 1953, that in all its simplicity remains the quintessential aquatic example of form following function.

The distinctive “turtle” shape of Seiko automatic dive watches and the brand’s pioneering work in professional diving (Prospex) pieces from the mid ’60s makes it an enduring classic and one that still comes at a surprisingly accessible price. The SRPE39, to give it its more mundane title, is available from September at Seiko’s online shop and features some new elements added this year, including a ceramic bezel insert and a sapphire crystal. But that does nothing to obscure the iconic DNA handed down from the King Turtle’s predecessors from the ’70s. It remains a watch that looks and feels much more expensive than it is.

Ever since it launched its first watch dubbed “Waterproof” in 1949, Oris has leaned heavily into great value dive watches, with a golden patch in the mid ’60s that aesthetically still inspires many of its modern offerings. As a serious maker of divers, Oris has long been an active supporter of preserving ocean flora and fauna. The Carysfort Limited Edition is Oris’ second outing this year in support of the Coral Restoration Foundation, which seeks to rehabilitate coral reefs round the world. As well as being a great-looking dive watch, especially on the orange rubber strap shown here, the chunky 43.5mm Carysfort (rated to 300m) has an added GMT function which makes it just as useful above the waves as below them.

The Swiss brand has been known for its groundbreaking work in the development of ceramic watches for well over two decades, but one of its older classic steel watches, the Captain Cook of 1962, has become increasingly popular since the brand reintroduced it in a near-replica look and size (37mm) in 2017, complete with its signature rotating anchor on the dial. It was instantly popular with fans, who begged for a bigger format. This year Rado unveiled the latest Captain Cook in a sturdy 42mm bronze case with a striking green sunray dial and adding green ceramic to the bezel to create a watch that is both contemporary and reassuringly classic at a relatively accessible price.

There are a few brands with a longer history of supplying watches to the explorers of the sea than Ulysse Nardin, which was delivering marine chronometer clocks to several navies (including the USN) from the late 19th century. At the time, it was the only way to calculate your position at sea. So precision was a thing. In 2018 Ulysse Nardin launched an ambitious program of contemporary high-end watches suited instead to life below the waves. These have strong design codes unique to UN that are visible across several production models and striking special editions like the Nemo Point here, which refers to the furthest point in the oceans from land.

The Fifty Fathoms was the first watch ever capable of functioning at 300 feet below sea level. If you’re interested in the math, a fathom is six feet. So, six times 50 equals 300 feet. In fact, the actual length of a fathom has varied with history (just to complicate things). Regardless, in 1953, 300 feet was about the limit humans with aqualungs could reach. The big open face of the Fifty Fathoms made it easy to read underwater and an instant hit with French Navy divers and, soon after, the OG of the scuba world himself Jacques Cousteau, who wore his Fifty Fathoms while filming his Oscar winning doc The Silent World in 1956. If the Fifty Fathoms looks familiar it’s mostly because its utter simplicity has “inspired” the visual language of dive watches almost as much as the storied Rolex Submariner.

The choice of James bond since 1995, the Omega Seamaster 300M diver gave a new spin in 1993 to the age-old Seamaster launched in 1957. There is no doubt the endorsement of Her Majesty’s blunt instrument has done much to secure the longevity of this model. The Seamaster 300M has evolved a lot over the years, yet managed to dance the tightrope between dressy and sporty, leaning this way with one edition and that way with another. For our money, leaning more towards the functional and steely will always win out. You can’t go wrong with the latest take, for instance, which features a blue dial, a steel case, and blue rubber strap, with just a hint of playfulness in the etched ocean waves across the dial.

Panerai started out supplying Italian Navy frogmen in the 1930s, so it knows a thing or two about diving history. But it also knows about the future. This year, despite the global lockdown, Panerai has debuted a bewildering array of new watches at the frontier of materials science. This very special edition of the Submersible line was launched in support of Luna Rossa, Prada’s bid for the next America’s Cup (the oldest existing sporting trophy dating back to 1851). As well as a case made from Panerai’s proprietary Carbotech material—a tough, non-corrosive composite of carbon fiber that protects to almost 1,000 feet (300m)—it features a dark gray dial cut from the high-tech sail of the last Luna Rossa.

When the Tudor Pelagos first launched in 2012 it was the first watch ever to be issued from the Rolex stable in titanium. This is a serious diving watch, rated to 500m or (1,670 feet), significantly greater than most commercial watches. And at under $5,000 for a certified chronometer, it’s also a serious investment watch for the price, like bringing an M-1 Abrams to a knife fight. In a respectful nod to big brother Rolex, which developed it, the Pelagos carries a helium escape valve on the side, and a no-nonsense, crystal-clear readout crowned with the signature Tudor “Snowflake” hour hand. Of course, you only notice all of that when you get over the breathless beauty of the dial and bezel (introduced in 2015) in a shade of ocean blue so deep you want to swim in it for ever.

It would stand to reason that Victorinox, maker of Swiss Army knives since 1890, should double down on reliability when it comes to its watches, too. Victorinox watches are submitted to a unique battery of 130 in-house tests for reliability and strength as well as passing the international standard ISO6425 for dive watches that was established in the ’90s. This quartz model comes with a lightweight titanium case, which is hypoallergenic and up to 45 percent lighter than stainless steel but just as strong, and a really good price.

For all the purist talk about less is more in dive watches, on very rare occasions and in the right hands, more is more, too. Take this special-edition Breitling launched last month: the Breitling Superocean Heritage B20 Automatic Black Steel Beverly Hills Edition, a direct descendent of the debut 1957 Superocean. The watch was created in a limited run of 50 for the newly opened Breitling store on Rodeo Drive in Los Angeles, but you can also have at it through Breitling’s website. This black and rose gold watch (rated to 200m) is a big ‘un at 44mm diameter, but the blackened DLC case, “beads of rice” bracelet and matte ceramic bezel will make it seem smaller. Think of it as the kind of stealth that everyone will notice.

Finally, way out of left field comes the 39mm Vostok Amphibia, a Russian-made watch that has a robust case and movement but a handful details that futz with all the normal conventions of the dive watch. There’s no click to the bezel and it’s bi-directional (Kryptonite to divers, even though many early diver bezels were not unidirectional). It’s also shiny as all get out and you’ll want to change the steel bracelet asap for a more functional—and dive-like—rubber strap. But all of that pales against its one claim to fame, that this is Steve Zissou’s watch, worn by Bill Murray in Wes Anderson’s The Life Aquatic (2004). There are many dial variations out there, but for the movie the Amphibia came with a custom created dial with a large gray ship’s wheel and anchor adorning the face. Even without the handy price, for many of us the Zissou connection alone is all we need.