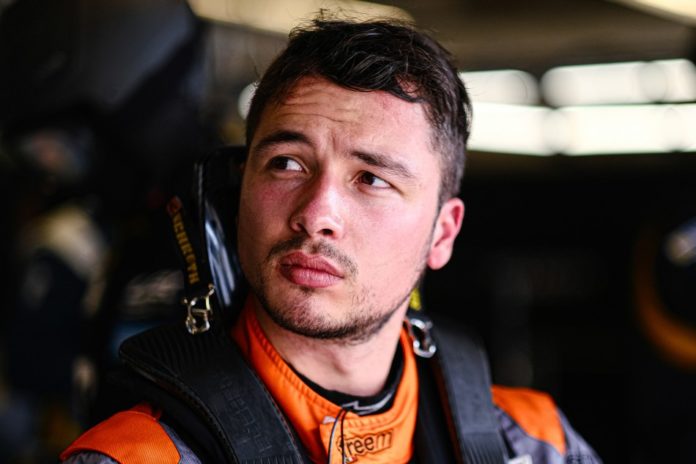 His teammates Matteo Cairoli and Egidio Perfetti put the car on pole position for the LMGTE AM class and the three drivers finished the race in Austin, Texas on the third step of the podium.

Next week, Laurents Hörr will return to the Team Project 1 cockpit, re-joining the team for the Total 6 Hours of Spa-Francorchamps on Saturday 15th August.

Question 1: How did you get the opportunity to drive for Team Project One?

Laurents Hörr: “It was quite spontaneous, just 14 days before the race. I was testing with DKR Engineering in Barcelona and when I was on the trip back home I received a text from the team principle asking me to call him.  They wanted me to test as they wanted a good silver driver.  They invited me, and some other drivers as well, for an interview and simulator driving.  Then 7 days before the race in Texas I got the call to say they wanted me to drive at COTA.”

Q2: How was it driving the Porsche 911 RSR?  We understand you didn’t have much time to get used to the car before the event.

Q3: How different is it racing in the WEC compared to the Michelin Le Mans Cup, especially moving from LMP3 to LMGTE?

LH: “It wasn’t too hard; the biggest difference was that I wasn’t the fastest car on track.  So usually blue flags are not a thing for me, now they were.  It was good that I knew everything already.  It was really different driving a GTE compared to the LMP3.”

Q4: What did you think of the Circuit of The Americas track? Was this your first time racing in Texas?

LH: “Actually, I have never been to the United States before.  I had done a lot of work in the simulator, but it was my first time at COTA.  The sim work prepared me a little bit but the track is super challenging and even though there is a really long straight, there isn’t a lot of time to rest.”

Q5: What was the atmosphere like within the team when Matteo and Egidio took pole position in Austin?

LH: “Everyone was really happy about it and it was great to be part of that.  Because we had a really good position for the race there was also some pressure on everyone.”

Q6: How was your stint during the race?

LH: “Actually I did two stints, two 1-hour stints.  In the first one I was very consistent, with good lap times, and the second I was really fast, and I was nearly able to match Matteo’s (Cairoli) times, just not quite, but I tried very hard and it was OK.  I was happy about my pace, everyone was very confident about it.”

Q7: To get a podium finish in the WEC on your debut must be very special?

LH: “Yes that was really awesome.  I finished the 2019 season in Portimão with the championship title and it was nice to begin 2020 with a podium, especially on my WEC debut, which was a real honour to finish there.”