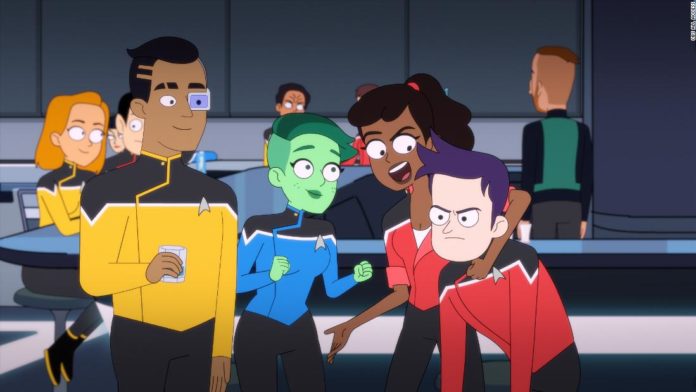 The stewards of “Star Trek” have long sought to navigate the line between nostalgia (it made its debut in the mid-1960s, after all) and exploring new frontiers. Yet after bringing back Captain Picard to augment its roster of live-action fare, “Lower Decks” has the potential to appeal to a few younger visitors, assuming they’re immersed enough in “Trek” lore to get the jokes.
While “Star Trek” has usually focused on the captains of the various starships, this new show from Mike McMahan (“Rick and Morty,” “Solar Opposites”) delves far below the bridge, highlighting unsung characters who describe themselves as the ship’s “cool scrappy underdogs.”
Not only does this bunch have relatively mundane jobs, but they serve aboard the USS Cerritos (understanding Southern California geography is helpful to appreciate the banality of that), whose mission is to make “second contact,” which is, well, not nearly as important as the first variety.
The key figures are Ensign Brad Boimler (voiced by Jack Quaid), who harbors dreams of a more important role in Starfleet hierarchy; and Ensign Beckett Mariner (Tawny Newsome), a free-spirited rule-breaker who doesn’t appear to possess much respect for the chain of command or authority in general, for reasons that eventually are made clear.
“Lower Decks” has some fun with various aspects of the “Trek” universe, like the bawdiness of Klingons and difficulty pronouncing their names. Yes, we do see the captain and first officer (voiced by Dawnn Lewis and Jerry O’Connell, respectively), but the thrust here is about the grunt side of a starship, not the glamor.
It’s an amusing premise, if not an especially edgy one. Nor does it go deep enough initially in playing off the notion of, say, those faceless, red-shirted crewmen who were so disposable in the original series, beaming down to planets and seldom making it back alive.
CBS recognized early that “Star Trek” is among its most formidable assets for the streaming age, relying on the passion of its fans to beam up subscribers. Small wonder there’s another live-action show in the works, plus an animated one for Nickelodeon.
Still, scanning that long list of “Star Trek”-related movies and shows over more than a half-century, “Lower Decks” falls squarely in the second-contact category.
“Star Trek: Lower Decks” premieres Aug. 6 on CBS All Access.