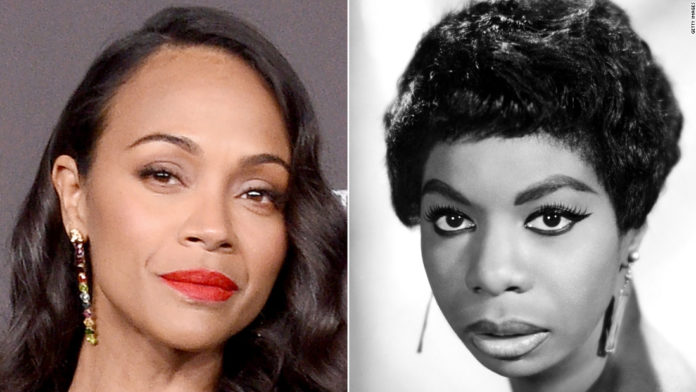 Saldana had previously defended her portrayal of the legendary soul singer in the film “Nina,” which was not endorsed by Simone’s estate and caused outrage among many of the star’s fans.
But the actress, who is of Dominican and Puerto Rican descent, said in an interview broadcast on Instagram on Tuesday: “I should have never played Nina.”
“I should have tried everything in my power to cast a Black woman to play an exceptionally perfect Black woman,” she said.
Much of Simone’s work centered on her marginalization as a dark-skinned black woman in America, and fans condemned the casting since it was first announced in 2012. When promotion for the film began, Simone’s estate tweeted at Saldana: “Cool story but please take Nina’s name out your mouth. For the rest of your life.”
A tearful Saldana said on Wednesday: “I thought back then that I had the permission because I was a Black woman. And I am. But it was Nina Simone, and Nina had a life and she had a journey that should be honored to the most specific detail, because she was a specifically detailed individual.”
“I’m so sorry because I love her music,” Saldana said.
The controversy marked one of the most high-profile incidents of “whitewashing” in Hollywood. In recent years, a number of well-known actors have caused outrage by being cast to play historical figures of a different race or ethnicity, or altering their skin color for a biographical role.
In recent weeks, Black Lives Matter protests and renewed discussions about systemic racism have prompted a number of filmmakers and TV producers to apologize for using blackface or making insensitive casting choices.
Saldana had initially defended her casting, telling Allure in 2016: “I made a choice. Do I continue passing on the script and hope that the ‘right’ Black person will do it, or do I say, ‘You know what? Whatever consequences this may bring about, my casting is nothing in comparison to the fact that this story must be told.'”
“For so many years, nobody knew who the f**k she was. She is essential to our American history. As a woman first, and only then as everything else,” the actress added at the time.
But this week she said: “She’s one of our giants and someone else should step up. Somebody else should tell her story.”
“Nina” was ultimately panned by critics on its release.
Anger around the casting was heightened by Simone’s legacy as a fixture of the 1960s civil rights movement. A number of her songs addressed racism in the United States; she wrote “Mississippi Goddam” after the killing of civil rights activist Medgar Evers, while “Four Women” described the experiences of four women of different skin tones.