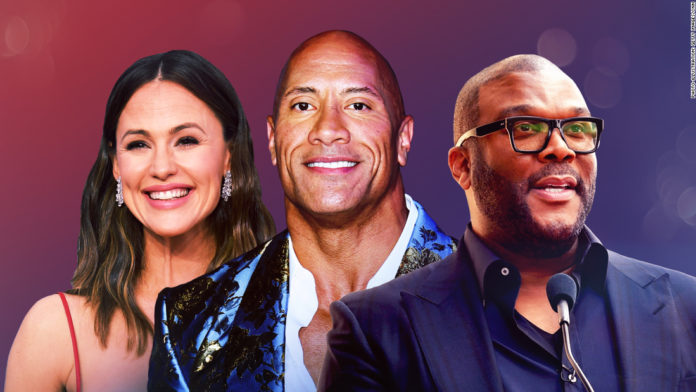 As the months of the coronavirus pandemic drag on and uncertainty in our lives abounds, we all need something to look forward to.
And much like how movies and television have helped us pass the time, thinking about fresh content to consume may also offer some much-needed joy.
Tinseltown is anxious to get back to work, and some productions have already resumed.
But just as there is debate surrounding a return to offices and campuses, questions linger as to how safe it really is to return to movie and television sets.
The answers remain to be seen, but some in the industry are doing what they can to balance productivity and safety:
Dwayne Johnson: “The Rock” announced this week that his Netflix film “Red Notice” is going to resume production next month.
“Like so many of us here in the US and around the world — getting back can be a tough decision that work requires real consideration and strategic planning around best health practices and safety measures,” he posted on Instagram in the caption accompanying the announcement video.
The comedy thriller, which also features co-stars Gal Gadot and Ryan Reynolds, will be filmed in the safest and most aggressive “quarantined bubble,” according to Johnson.
Johnson has given a great bit of thought about returning to set, he said, especially because his mother is a stage III lung cancer survivor at high risk for Covid-19.
“I’m confident in our safety strategy and execution, but we’ll also be fluid and amenable to best practice changes on the fly,” Johnson wrote.
Tyler Perry: Johnson may want to talk to Perry about how he’s successfully been able to pull it off.
The media mogul restarted production on some of his television shows last month, forming his own “quarantine bubble” at his Tyler Perry Studios in Atlanta.
One of the stars of Perry’s BET series “Sistas,” actress KJ Smith, recently spoke with CNN from the set and said there was strict protocol while filming.
The cast and crew had their temperatures taken and were being tested for coronavirus frequently, Smith said. All team members are also required to wear masks, stay socially distant and were encouraged to hold each other accountable if someone was without their mask for any length of time.
Perry also made sure to make things feel as “at home” as possible, she said, with food and lodging, online church services on Sunday and virtual yoga sessions to help with the stress of working during a pandemic.
“We call it ‘Camp Quarantine’ and it’s incredible,” Smith said. “We had a [socially distant] luau yesterday with barbecue. Honestly, it’s like adult camp.”
It’s taken some creativity to get back to being creative.
Some soap operas have reportedly used dolls and, in some cases, an actor’s real-life romantic partner as stunt-kissing doubles to try and prevent any possible transmission.
There are green screens and computer-generated imagery being used in some cases to help make it appear that the actors are closer than they actually are.
Jennifer Garner: Where there is a will, there is a way, and Garner reminded us recently that there is a great deal of will among artists and entertainers eager to get back to work and share in the spirit of creative collaboration.
She shared what she missed most about being in front of a camera in an Instagram video this week, describing “that little sacred holy space” that exists on set between the actors and the crew.
“Dear Camera, Sound, AD, Wardrobe, Set Dec, Props, Hair, Makeup, Transpo, Nancy, Shauna, Grips, Electrics, I miss you guys — like, a lot,” she wrote in the caption to the video. “The next time we are on set together, we will celebrate, make something lovely, and dance, won’t we? I can’t wait.”
We are with you, Jen.

Three things to watch:
A gift for the Trekkies is always welcomed.
CBS All Access has come through with a little something different for them.
“Star Trek: Lower Decks” is described by the network as “an animated comedy series that follows the support crew on one of Starfleet’s least important ships, the U.S.S. Cerritos, in 2380.”
Animated shows are stepping up during the pandemic and I’m not mad about it.
“The Swamp” is one of the latest political documentaries that are sure to stir interest during a presidential election year.
“For political junkies, ‘The Swamp’ has its merits simply as a peek behind the curtain at those pulling the levers of power,” CNN critic Brian Lowry wrote. “When it’s all over, though, the film proves less about dredging the swamp than the filmmakers gaining the opportunity to provide a close-up view of what it’s like to muck around in it, a process that offers less clarity or insight than advertised.”
The doc airs on HBO, which is owned by CNN’s parent company.
The life of revered congressman and civil rights champion Rep. John Lewis is a rich one.
You’ll want to catch “John Lewis — Get in the Way,” which PBS is streaming until August 17 as a way of honoring Lewis, who died of cancer last month at the age of 80.
Two things to listen to:
One of country music’s biggest star’s has a new album coming out.
Luke Bryan’s “Born Here, Live Here, Die Here” drops on Friday.
Non-country music fans know him from serving as a judge on “American Idol,” which is reportedly set to kick off virtual auditions on August 10.
Who are we kidding? Even if you don’t listen to country music, you probably still know who Bryan is.
Cardi B and Megan The Stallion are two of the most successful women in the rap game, and now they are joining forces.
Cardi’s single, “WAP” featuring Megan The Stallion, drops on Friday.
One thing to talk about:
Speaking of dope collaborations, we really, really need an Adele and Beyoncé duet.
Their mutual admiration has been on display for years.
Who can forget the way Bey teared up during the 2017 Grammys when Adele used her acceptance speech for the coveted Album of the Year award to praise the Queen.
“My artist of my life is Beyoncé,” Adele said emotionally. “And this album for me, the ‘Lemonade’ album is just so monumental.”
“It was so monumental and so well thought out and so beautiful and soul-bearing, and we all got to see another side of you that you don’t always let us see and we appreciate that,” Adele said from the stage to Beyoncé, who sat in the audience. “You are our light.”
Adele has continued that love, jamming as hard as we did to Beyoncé’s Coachella set, and most recently Adele fangirled over “Black Is King.”
Last year there was even buzz that a duet was coming, but that fizzled out.
With all that’s happened in 2020, however, we feel like this year OWES us at least a single, if not an entire album!

I’m kind of obsessed with how the rich and famous are making it through during these times.
When you have multiple homes and lots of disposable income, quarantining just hits different.
Thank goodness for social media where celebs have turned to share all of their musings about how they are surviving.
Model Bella Hadid did not disappoint in her recently published Q&A with Elle magazine.
She “may have been holed up on her family farm, but that hasn’t stopped the supermodel from engaging with the outside world,” according to the publication.
Hadid, who appears on the digital cover of this month’s Elle, talked everything, including her support of Black Lives Matter and how she thinks fashion might change in the wake of the pandemic.
But I was most charmed by what she misses most about New York City while staying on her family’s farm in Pennsylvania.
“I miss smiling at people. I miss hugging, a lot. I miss walking around and listening to music,” she said. “It’s different when you’re in the city. You can walk forever — going nowhere and somehow still feeling like you’ve got somewhere to be.”
Sometimes stars are just like us.
Pop back here next Thursday for all the latest happenings that matter in Hollywood.