Home Sport London Marathon to have elite athletes only 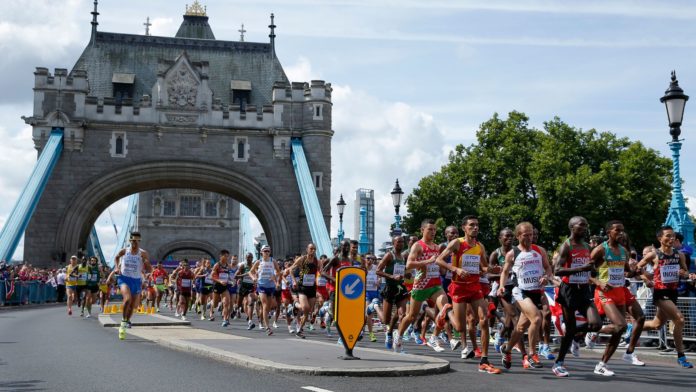 Annual event on October 4 will see looped 26.2 mile course around St James’s Park within a biosecure bubble without any spectators

The pandemic-delayed London Marathon will be staged on October 4 with a unique route and only elite runners, organisers have announced.

Instead of starting in Greenwich, east London, there will be a looped 26.2 mile (42.2-kilometres) course around St James’s Park within a biosecure bubble without any spectators.

Times will be eligible for qualification for the Tokyo Olympics, which also had to be rescheduled until 2021 due to the coronavirus pandemic.

Olympic marathon champion Eliud Kipchoge and Kenenisa Bekele are expected to feature in the men’s race.

Meanwhile, the women’s field is headlined by world record holder Brigid Kosgei while Manuela Schr and David Weir will feature in the wheelchair event.

The marathon usually takes place in April, but organisers have already pushed back the 2021 event until October 3 to maximise the possibility of a mass race returning.

“Today is a day of sadness, but also I think it’s a day of certainty,” event director Hugh Brasher said, hailing the “inclusivity” of the new-look race.

“It’s a day where we’re announcing what is appropriate – we think – for the 40th race. It’s certainly not something we ever expected to do.”

“We hope people will get inspiration from the gods of our sport still battling it out over those 26.2 miles in the only world marathon race that is taking place in the fall.”

Those who had planned to take part in the event, originally postponed from April 26, have been offered the option to defer their places to the 2021, 2022 or 2023 events.

Additionally, 45,000 people who were supposed to take part in the event in the spring will take part in a “virtual race” across the world, receiving a finisher’s medal and T-shirt for completing the 26.2-mile distance from home anywhere in the world within 24 hours on October 4.

Brasher said: “We believe it’s the greatest marathon in the world, the greatest athletes in the world are still coming, and we hope that Britain gets behind the 45,000 who will run or walk that 26.2 miles on October 4.

“And in that journey, one of the pieces to celebrate in a way – is that actually this will make it the most inclusive London marathon, we believe, in history – because people have 23 hours, 59 minutes and 59 seconds in which to take part.”

In 2019, the event raised a record-breaking £66.4 million for charitable causes, and Brasher said £20m had been raised for good causes this year at the time of cancellation.