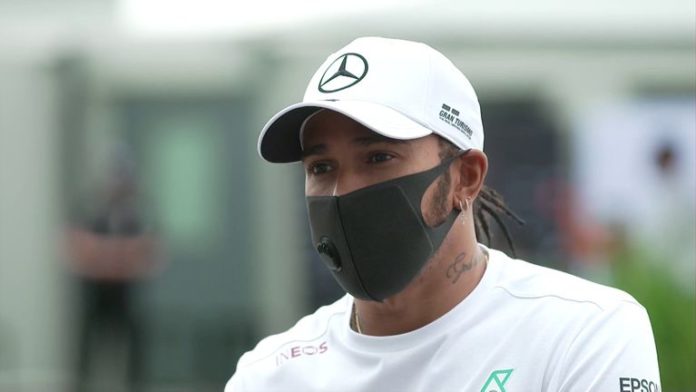 Sky Sports exclusive: Hamilton on why he feels ‘a little bit awkward’ discussing a contract in a pandemic and why education and discussion is at the heart of improving diversity

Lewis Hamilton says he fully expects to agree a contract to stay at Mercedes but admits he does feel “awkward” discussing a new deal at a time when people are suffering due to the impact of the coronavirus pandemic.

Mercedes on Thursday announced that Valtteri Bottas had signed a new deal to stay on for 2021, turning focus on Hamilton’s situation with the six-time champion currently out of contract at the end of the year.

Hamilton was speaking to Sky F1’s Karun Chandhok on the same day in the Silverstone paddock in a wide-ranging interview at the launch of Puma’s new Mercedes-AMG Petronas F1 Team Speedcat Pro.

Watch the full interview in Sky Sports’ race day show at the 70th Anniversary GP on Sunday from 12.30pm.

Asked when he’ll be joining Bottas in signing a deal, Hamilton said: “I really want to. I’m sure Toto’s probably getting a little bit anxious because I haven’t been too forward with it – like ‘let’s get it done, now!’

“So, I don’t know, I feel a little bit awkward with it, that’s why I’ve kind of stepped back a little bit. But, of course, I will do at some stage. But it’s awkward – I’m like ‘how long can I leave it until it’s maybe a little bit more normal, things maybe get a little bit better?’

“But I am absolutely 100 per cent committed to my team. I’m loyal as ever and I don’t lie, so it’s not like I’m communicating with someone else – I don’t want to be anywhere else.”

Hamilton on diversity: School curriculum needs to be improved

Hamilton has been a leading and powerful voice on the Black Lives Matter movement and diversity topics in recent months.

“I want to just encourage people to speak out, bring it up and start a conversation about things that perhaps are uncomfortable,” he explained.

In order to widen opportunities for people from more diverse backgrounds to get involved in motorsport, Hamilton has launched a commission in his own name and has spoken of his passion for improving education.

“We are in a time where we can’t just keep talking about it, we need to start putting things in place,” said the world champion.

“The thing is, it’s not that easy to fix. So if any adult today is ‘it’s not about me, it’s down to the youngsters today’ it’s actually incorrect. The parents, us, the older generation now need to educate ourselves so we can then try to educate and pass it down to the kids.

“I think the Government needs to do better with the curriculum because a lot of these schools I think get to choose what their curriculum is and you learn about a certain religion, you don’t learn about all the religions. You don’t have a diversity and inclusion class to understand what is appropriate to say and what is not.”

Expressing his pride at the steps Mercedes have already taken to show their support and improve their own understanding and action around diversity topics, Hamilton said: “These past couple of weeks they’ve found a company that is doing diversity and inclusion training.

“So I went and had a session with them and it was incredible. I’m open to learning, absolutely – I’m not perfect – and so just learning what is right and what is… and I feel kind of the whole of society, we’re so behind.

“The things that people were saying when I was at school, about so many different races, you look back and you’re like ‘oh my god, that was terrible back then’. But it is still evidently there today and so how can we change it?”

On the weekend F1 marks the 70th anniversary of the sport, Hamilton is moving ever close to become the most successful driver of all time.

The Briton is just four wins behind Michael Schumacher’s tally of 91 victories, and now only has one podium finish fewer than the German great, while his 30-point championship lead over Bottas keeps him on course to become the second driver to win seven drivers’ titles.

Reflecting on his extraordinary achievements so far, Hamilton said: “I think we [he and his family] truly believed we could get to Formula 1 – of course we didn’t know whether it was going to happen – but I could never had say to you I was going to have six world titles and be fighting against someone I watched win all those titles record-wise.

“It’s above and beyond that [what he could have expected].

“Then, even more so, to be living in a moment where we are in a pandemic and then we have the Black Lives Matter movement and be seen as one of the many, many voices out there. I didn’t realise that when I get to 35, this would be my path or my journey, but I’m grateful for it and trying to do the best I can with it, at the same time enjoying the driving and enjoying the competition.”