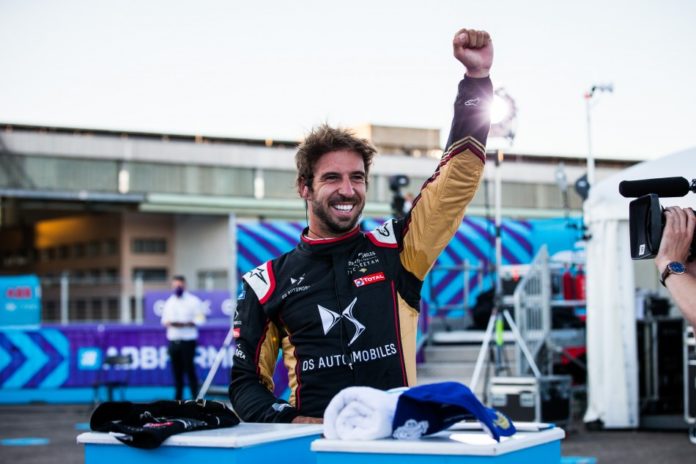 António Félix da Costa doubled up in round seven of the 2019/20 ABB FIA Formula E Championship in Berlin today (6 August), as Wednesday’s winner unleashed another dominant drive on the streets of the historic Tempelhof Airport to secure his third victory of the campaign ahead of former champions Sébastien Buemi and Lucas Di Grassi.

Following a commanding Super Pole lap in qualifying – almost half-a-second quicker than any of his adversaries – da Costa produced almost a carbon copy of yesterday’s performance to lead today’s Berlin E-Prix from lights-to-flag.

The DS Techeetah ace made a textbook start and thereafter was never headed; the only brief challenge to his supremacy came when he took ‘ATTACK MODE’ for the first time and rejoined alongside Buemi, but the Nissan e.DAMS man was unable to keep his nose in front. Da Costa’s success marked the Portuguese star’s third consecutive triumph and extended his margin at the top of the title standings to 68 points with four races remaining.

Fellow front row starter Buemi ran second for most of the race, finding himself having to fend off Audi Sport ABT Schaeffler’s Di Grassi midway through following a lock-up but ultimately going on to consolidate his position and cement his best result of the season.

Di Grassi gained a place to fifth early on at the expense of Alex Lynn, as the Briton slipped down the order from his second row grid slot, before utilising his experience and racecraft to opportunistically pass Nyck De Vries (Mercedes-Benz EQ) for fourth.

The Brazilian spent much of the latter part of the race embroiled in a fierce, see-saw battle for third with Envision Virgin Racing rival Robin Frijns, with the pair’s entertaining duel allowing Mercedes-Benz EQ’s Stoffel Vandoorne and the second Envision Virgin Racing entry of Sam Bird to latch onto the back of them in the closing stages.

Di Grassi had to use all of his guile to defend his position from the three drivers snapping at his heels, with Frijns flashing across the finish line right in his slipstream in fourth for only his second points score of the campaign.

Much like yesterday, Vandoorne was one of the stars of the show as he scythed through from 13th on the grid. The Belgian set the race’s fastest lap during the course of his charge and – with the assistance of ‘ATTACK MODE’ – pulled off a spectacular three-wide move around the outside of Oliver Rowland and Bird as the British duo disputed fifth place on lap 21.

Bird placed sixth in the final reckoning, making a bright start from ninth on the grid before working his way up the order. Countryman Rowland held on to finish seventh for Nissan e.DAMS, ahead of Edoardo Mortara in eighth, the ROKiT Venturi Racing driver picking his way through the field and running as high as sixth at one stage.

The top ten finishers were completed by Wednesday’s runner-up André Lotterer – the TAG Heuer Porsche man struggling to reproduce the same pace today – and da Costa’s DS Techeetah team-mate Jean-Éric Vergne, whose qualifying struggles continued in the race, the Frenchman slipping to tenth late on as he complained of fading rear tyres.

Following a day off, the action resumes with rounds eight and nine at the weekend, when competitors will tackle Tempelhof’s regular anti-clockwise lap – a change that da Costa’s rivals must be hoping will enable them to turn the tables.

‘Today was very hard. We were quicker but there wasn’t a moment Seb didn’t have me looking in my mirrors. The first ATTACK MODE was a bit tight especially in the exit but I knew I had the gap – Seb was fair and left me the space. The team was giving me the right information on the battery temperature. Days like this are rare, I know how hard it is to get here and I’m happy to be living this now. Day by day everyone will get close to each other, the next few races will be very tough!’

‘The race was closer than I thought. I was unlucky with the first ATTACK MODE as there was Full Course Yellow and I lost its advantage – that would have probably changed things. I had to overtake Lucas and wasted some time there, but in terms of pace we weren’t too far off. DS TECHEETAH are extremely quick, hopefully on Saturday we’ll have more pace during Qualifying. Today we have made a big improvement, on Saturday we’ll be racing on the original track and we hope to do even better ahead of the next race and maybe challenge them.’

‘It was a good day overall. The race was a lot of work but we managed to finish on the podium. We need to keep improving, Saturday we’ll race on the original track and it changes the car, overtaking points and I think it will be better for us to race in that direction, but we’re going to keep working hard to find a better performance since Antonio and the DS TECHEETAH are on a different level. There are plenty of points up for grab and we need to do our best.’