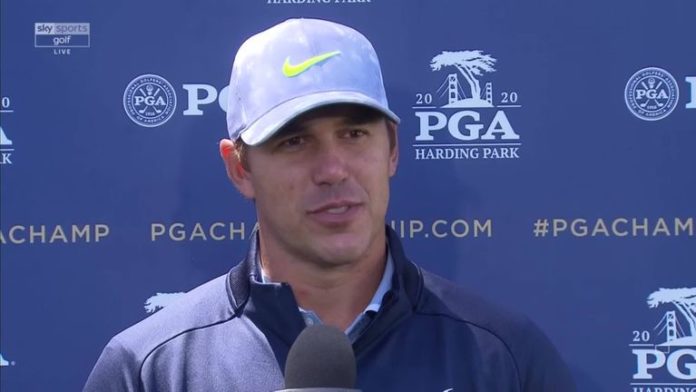 Rory McIlroy was pleased with his recovery from a rocky start to the PGA Championship and admitted he needed to tidy up his driving in the second round.

McIlroy felt the benign, soft conditions early on meant the TPC Harding Park course was “there for the taking”, but he was unable to take full advantage as he fired a level-par 70 which left him five strokes behind early leader, Jason Day.

The two-time champion matched the birdies of playing-partners Tiger Woods and Justin Thomas at their opening hole, the 10th, but he was soon forced into damage limitation mode when he bogeyed three in a row from the 12th – and he did well to drop only one shot after driving into the hazard at the 14th.

However, McIlroy fought back with birdies at 16 and 18, and a 10-foot putt for another at the first got him into red figures until he missed another fairway at the sixth and could not avoid his fourth blemish of the first day.

“I actually got off a nice start, birdieing the first hole of the day, the 10th hole for us, and then I made three bogeys in a row,” he said afterwards. “And it ended up being a pretty good bogey on 14.

“And then after that, I was happy, I birdied three holes in a four-hole stretch to get back to under par for the day which was nice. That was good. Then on our second nine, I didn’t hit fairways, and then from there, the way that the pins were tucked, I was just trying to play to the front of the greens and two-putt from 40 feet and move on to the next hole.

“I need to hit a few more fairways tomorrow to try to attack some pins and get it closer, and not leave myself four and five-footers for par all day. Condition-wise, the wind wasn’t up and it was a little warmer, so that was nice. I felt like the course was there for the taking. Obviously Jason Day shot five under, and there’s been a few four unders.

“It was there for the taking today. I mean, I feel like I definitely could have been a few shots lower, but you know, I sort of grinded it out and with how I hit it on the back nine, even par actually wasn’t too bad. The way the conditions were, if you hit it well today, every hole was nearly a birdie chance.

“It didn’t quite materialise like that for me but it was good to get it back to even par,” added McIlroy, who admitted the atmosphere between the marquee threeball was cordial and relaxed, and that the lack of spectators has led to a significant uptick in the pace of play – perhaps too quick for a major.

“Certainly I have to remind myself all the time to slow down whether it’s a major or not,” he said. “I think most people would say they play their best golf when they are slightly relaxed, not too, and not on the other side and too intense.

“We all know each other and play a lot when we are at home, so that makes it a comfortable grouping, as well. Yeah, definitely, I think that’s one of the things that’s come out of not having fans is the rounds have been a little faster. You don’t have to wait for people to settle down, and especially when you’re hitting it in the rough all day like I was.”

Brooks Koepka boldly declared “I probably should win” at his pre-tournament press conference, and he was delighted with his performance and his long-game in particular as he began his bid for a third consecutive PGA victory with a six-birdie 66.

“My iron play I think is key,” he said. “I felt like we had a lot of good numbers today, which always helps, but I struck it really well, put it in the right spots. Felt like I had a good uphill look most of the time, and that’s what you need to do out here. You’ve got to drive it in play, and I felt like I did that. I was pleased with it overall, everything.

“The majors almost seem like an easier week for me, nine holes pretty much every day in the practice rounds and try to stay off my feet and not do too much. I think sometimes guys can not over-prepare, but just practice a little too much.

“If you’re going to be here until Sunday it’s pretty mentally draining. Physically it’s fine, but mentally I’m done after four days of this.”