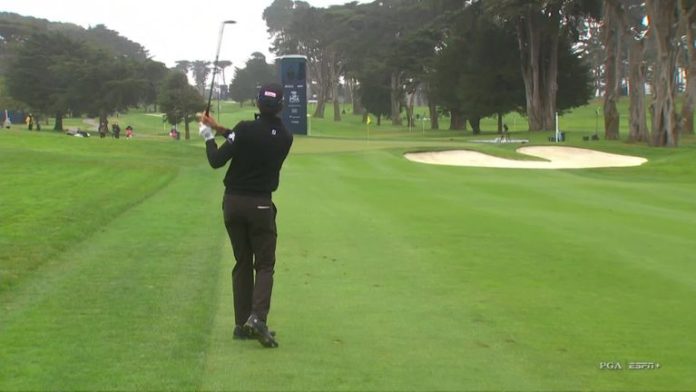 Watch the second round live on Friday. Coverage starts at 6pm on Sky Sports Golf.

A rejuvenated Jason Day shares the first-round lead with Brendon Todd as major tournament golf returned for the first time in over a year at the PGA Championship in California.

Day fired the first 65 at TPC Harding Park and was one of only four players to hand in a bogey-free card along with US Open champion Gary Woodland, England’s Tom Lewis and Brian Harman, while Brooks Koepka opened his bid for a third consecutive PGA win with a 66 which was matched by the likes of Xander Schauffele and Justin Rose.

Tiger Woods opened with an encouraging 68 in only his second start since the coronavirus shutdown, while Rory McIlroy managed to grind out a 70 despite missing a number of fairways, with world No 1 Justin Thomas hampering his chances of a second major with two double-bogeys over his final seven holes in a 71.

Day arrived in San Francisco on a run of three straight top 10 finishes that have lifted him back into the world’s top 50, the Australian having slipped to 62nd after he missed the cut at the Rocket Mortgage Classic last month, and his suspect back held up in the cool, early conditions.

Bryson DeChambeau was the focus of attention again after breaking his driver, but did he do it in anger?

The 32-year-old opened with a birdie at the long 10th and put together a nice run of pars until knocking his tee shot at the 17th to three feet and converting for birdie, and he picked up further shots at the first and fourth before finishing with a flourish at one of the toughest holes on the course.

Day smote a 211-yard approach to six feet at the ninth and rattled in the putt for his fifth birdie of the round, earning him the early clubhouse lead ….

“I finally had enough of feeling sorry for myself, and it’s easy to do that in this game because it is so mentally tough,” said the 2015 PGA champion. “You can start blaming everything else but yourself. Sometimes you’ve just got to pull your pants up and just move on, you know.

“I feel like the momentum that I’ve had over the last three starts has kind of seeped into this week. The funny thing is that every day I’m excited to go back to the golf course and play, whereas before I was struggling to get up and going, thinking do I want to kind of put myself through this again. To be honest, I’m excited to get out and play every week now.

“I’ve been working very hard in the off-weeks and especially when I come to a tournament to be able to get my putting back to where it is, because it’s always been a strength of mine, and I feel like the game is slowly coming around. The confidence is coming around because I’m starting to see the results, which has been good.”

Day held the outright lead until late in the day until Todd joined him on five under when he found the cup from outside 20 feet for his seventh birdie of the day at the seventh – his 16th – although he did well to save par at the ninth when he holed from 10 feet having been a little bold with his long-distance birdie effort.

The top two will sleep on a one-stroke lead over a group of nine players to shoot 66s, including Martin Kaymer on the 10th anniversary of his maiden major victory in the PGA Championship at Whistling Straits.

The German is without a win since running away with the US Open at Pinehurst just over six years ago, and he watched footage of that triumph to give himself inspiration for this week’s challenge, a move which appeared to pay off as he carded four birdies and an eagle.

But perhaps the notable name in the logjam at four under is Koepka, who roared back to form in Memphis last week and made a strong start in his bid to become the first player to win the same major three years running since Peter Thomson secured a hat-trick of Open titles in 1956.

Rose birdied three of the last six holes and pulled off a series of clutch par saves to add his name to the 66 club, while Paul Casey was nicely placed on four under only to make a mess of the 18th and undo much of his earlier good work with a double-bogey six.

Woodland, Lewis and Ryder Cup star Alex Noren, one of the last players to gain entry to the event, are among a group of eight on three under, with Open champion Shane Lowry a shot further back alongside Woods, Casey and Bryson DeChambeau, who got to four under with five to play before back-to-back bogeys at 14 and 15.

Woods didn’t appear affected by the cold or a lack of competitive sharpness early on as he followed an opening birdie at the 10th with a 33-foot putt for another at 13, although he then bunkered his second from the rough at the next and could not avoid a dropped shot.

One of many pulled drives led to a bogey at the second, but Woods got back on track with three birdies in four holes from the fourth before handing another shot back when he was unable to complete a sand-save at the long, par-three eighth.

Woods fared the best in the marquee group of the day, with McIlroy following an opening birdie with three consecutive bogeys from the 12th as he paid the price for failing to find the short grass from the tee, and he did well to limit the damage to a single dropped shot at 14 after his drive veered way left and into a hazard.

McIlroy dug deep to make three birdies in four holes around the turn to get into red numbers, but another errant drive at the sixth led to his fourth blemish of the day, a number which could have been larger had he not holed several par putts from uncomfortable range throughout the day.

World No 1 Thomas was two under with seven holes remaining before he double-bogeyed the third and the seventh, with a birdie at the last ensuring he would end the day only one stroke behind Jon Rahm, the man he deposed at the top of the rankings with his WGC victory last week.