Home World Lebanon’s economy was already in crisis. Then the blast hit Beirut 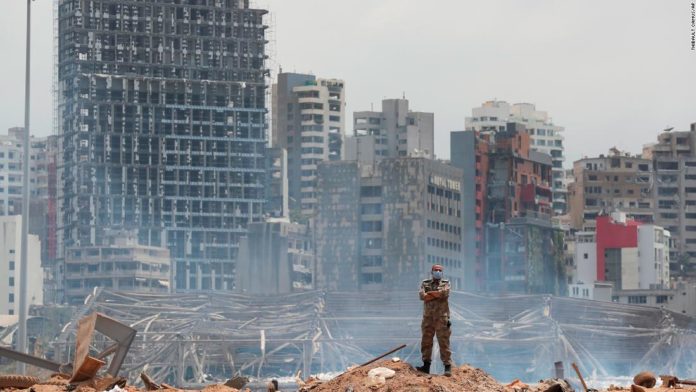 On Tuesday, a massive explosion at the city’s port left at least 135 people dead and 5,000 injured. The number of deaths is expected to climb as search-and-rescue efforts continue.
The blast, which also leveled huge swaths of Beirut and displaced 300,000 people, couldn’t come at a worse moment.
In the past year, a breakdown in the country’s banking system and skyrocketing inflation had triggered mass protests. Even before the Covid-19 pandemic hit, the World Bank projected that 45% of people in Lebanon would be below the poverty line in 2020.
“It’s an economic crisis, a financial crisis, a political crisis, a health crisis and now this horrible explosion,” said Tamara Alrifai, spokesperson at the United Nations Relief and Works Agency for Palestine Refugees in the Near East.
European and Gulf countries have sent aid to help Lebanon manage the fallout from the blast, and the country’s central bank instructed lenders to make zero-interest dollar loans to be repaid over the next five years so people and businesses can rebuild. But it’s expected to fall far short of what the country needs to pull back from the brink, and some donors may be deterred by widespread corruption and mismanagement.
French President Emmanuel Macron, who was mobbed by angry crowds during a tour of devastated Beirut neighborhoods on Thursday, said France would provide medication and food, but not via corrupt officials.
“This aid, I guarantee it, won’t end up in corrupt hands,” he told Lebanese protesters, according to a spokesperson.
Macron told reporters later that France would help organize an international conference to raise funds for Lebanon. He promised “clear and transparent governance, whether it’s French or international” to ensure the money is “directly provided to the local population, the NGOs and teams on site that need it.”

The economic situation in Lebanon was grim before the explosion.
The International Monetary Fund last forecast that Lebanon’s economy — beset by soaring food prices, a collapsing currency and Covid-19 — would contract by 12% this year. That’s far worse than the 4.7% average drop in output forecast for the Middle East and central Asia.
The country defaulted on some of its debt in March. And last week, Moody’s cut Lebanon’s credit rating to its lowest rank. It’s now on par with Venezuela.
“The country is steeped in an economic, financial and social crisis, which very weak institutions … appear unable to address,” Moody’s said in a statement. The currency’s collapse and the related surge in inflation create a “highly unstable environment,” it continued.
Lebanon had been looking to secure a $10 billion loan from the IMF, but talks stalled last month.
On Thursday, IMF chief Kristalina Georgieva called for “national unity” to address the country’s deep crisis, and she said the agency is “exploring all possible ways to support the people of Lebanon.”
“It is essential to overcome the impasse in the discussions on critical reforms and put in place a meaningful program to turn around the economy and build accountability and trust in the future of the country,” she added.
The explosion in Beirut, which has been declared a “disaster city,” will only pile more pressure on the economy.
“There is not one apartment in Beirut that wasn’t impacted, not one [business] that wasn’t impacted — whether the storefront [or] the goods,” Lebanon’s Economy Minister Raoul Nehme told CNBC Arabia on Wednesday.
The port where the blast occurred is the nation’s main maritime hub, and 60% of the country’s imports pass through it. Nehme said it has been “practically erased.”
Tourism accounted for nearly a fifth of Lebanon’s GDP in 2018, when two million people visited the country. That sector has suffered another huge hit.
“It’s a disaster for Lebanon,” said Pierre Achkar, head of the Lebanon Hotel Federation for Tourism. He said occupancy rates at the hotels still open had already slumped to 5% and 15% because of coronavirus and political issues.
Achkar told the state news agency NNA on Wednesday that the explosion damaged 90% of the hotels in Beirut.
— Chris Liakos, Nada AlThaher, Schams Elwazer, Barbara Wojazer and Sharon Braithwaite contributed to this article.