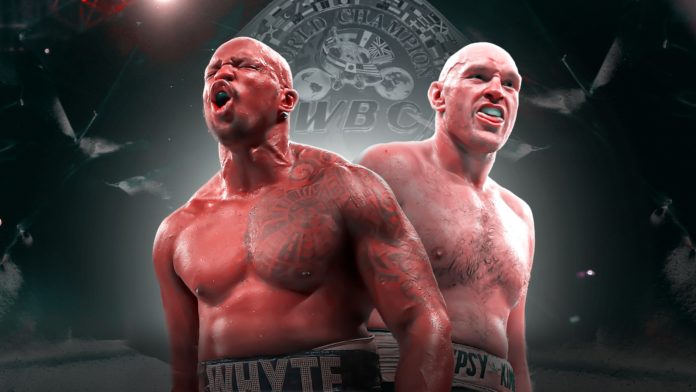 The WBC has confirmed that the winner of Tyson Fury’s next WBC title fight against Deontay Wilder must make a mandatory defence against Dillian Whyte.

WBC ‘interim’ champion Whyte faces Alexander Povetkin in the finale of ‘Fight Camp’ on Saturday August 22, live on Sky Sports Box Office, and victory for the Brixton man will set up a mandated fight for the WBC heavyweight belt in early 2021.

💥 Battle of the left hooks! 💥@DillianWhyte v Alexander Povetkin – Who will land first?

Fury is expected to defend the WBC title in a third fight with Wilder on December 19, with WBC president Mauricio Sulaiman stating that Whyte is next in line.

“We have had the flexibility with our champions and the WBC has approved Fury to fight by the end of the year, if it’s announced that it might be December 19, and the winner must make the mandatory defence early next year.

“When the [Fury-Wilder] fight takes place, we will order the pre-negotiations, so it’s a process that the promoters negotiate the fight and a date.

“It makes no sense to speculate on a date, but it’s going to be early next year when they are able to negotiate, or it goes to a purse bid.”

Promoter Eddie Hearn has reiterated that he expects Whyte to receive the first fight with Fury next year.

“Anthony Joshua is boxing in December. He won’t be ready to box again until June-July.

“Everybody acknowledges that’s the mandatory and that it’s next.”