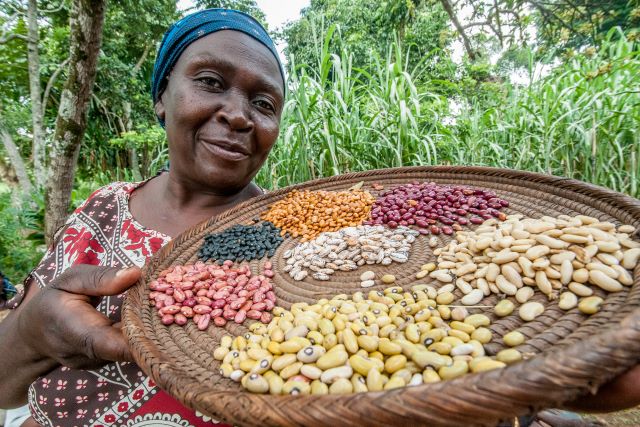 In Sub-Saharan Africa, around 80 percent of seeds used by smallholder farmers come from seed systems managed by farmers. Local seeds have adapted over centuries to local growing conditions and are more tolerant to weather changes, climate shocks, pests and diseases. Additionally, local seeds provide farmers with crops that meet household and market preferences, while helping to preserve agricultural biodiversity.

In emergency situations (such as cyclones, floods, pandemics and war) local seed reserves, which are key for ensuring food security and nutrition, are often completely wiped out. While interventions in the aftermath of a disaster mainly focus on immediate lifesaving interventions, restoring local food production after disasters and in emergencies should also be prioritized, including safeguarding crucial local seed reserves. This will protect and restore agricultural livelihoods for small-scale farmers and reduce their reliance on food aid and other humanitarian assistance.

When Cyclones Idai and Kenneth made landfall in Southern Africa in March and April of 2019, heavy rains, floods and landslides affected over 3.8 million people and destroyed nearly 800 000 ha of standing crops in Malawi, Mozambique and Zimbabwe. Farmers lost local seed reserves and crops that were ready for harvest.

In response, FAO has provided electronic cash vouchers and agricultural kits to improve food security, nutrition and livelihoods in the short-term. At the same time, FAO is also working with governments, genebanks and farmers to rebuild seed systems, supported by Germany, through a project entitled “Foundations for rebuilding seed systems post Cyclone Idai: Zimbabwe, Mozambique and Malawi”.

Operating under the umbrella of the International Treaty on Plant Genetic Resources for Food and Agriculture, the project both uses and reinforces the international conservation and exchange system supported by the Treaty. This is done through identifying seeds of local and lost varieties, and regenerating and returning them to communities for future use and safeguarding. The project is supporting national genebanks to undertake studies to understand what has been lost in cyclone-affected communities in the way of seed reserves and seed diversity, as well as identify what types of crops (including endangered species) small-scale farmers would like to continue to grow, eat and sell. In Zimbabwe, preliminary results have shown that some varieties farmers relied upon such as maize, sorghum, sugar bean, pearl millet, yam and mujena have disappeared altogether following the cyclone. Most of these lost varieties are conserved in the national genebank and can, therefore, be restored.

Furthermore, the project is looking further afield for other suitable seeds to introduce to affected communities. Climate data and farmer preferences of the target communities are being analyzed to explore possible matching germplasm from international, regional and national collections that could be mobilized relatively quickly and tested in cyclone-affected communities.

FAO’s International Plant Treaty is supporting the development of emergency response strategies and plans, at regional and national levels, that integrate the protection, strengthening and rebuilding of local seed systems. This will ensure that governments and communities are better prepared in the event of future disasters, which occur regularly in the region.

The coronavirus disease 2019 (COVID-19) has further impacted local seed systems in Southern Africa. It is expected that due to mobility and activity restrictions, further diversity will be lost; farmers’ access to seeds will be reduced; supply chains will be disrupted; research and development will be limited; and the distribution of germplasm available in the Treaty system will be diminished. This will further undermine food security and nutrition and the achievement of the related Sustainable Development Goals (SDGs). FAO’s International Plant Treaty aims to expand its work through this project, to include COVID-19 impact assessments on local seed systems in Southern Africa; and to integrate appropriate response strategies into its regional and national policy development work.

This article first appeared in German in the newsletter Welternaehrung