Home World 40 Years Ago: The Titanic Was Found and Lost 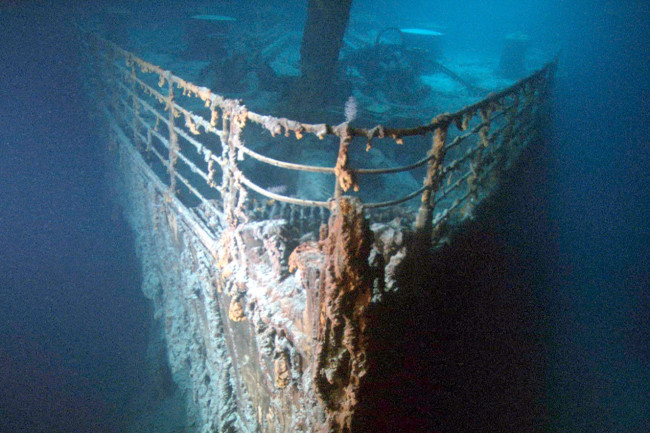 This story appeared in the September/October 2020 issue as part of Discover magazine’s 40th anniversary coverage. We hope you’ll subscribe to Discover and help support our next 40 years of delivering science that matters.

From the October 1980 Issue

The voice on the ship-to-shore phone sounded excited. “We think we’ve found the Titanic!” Mike Harris, leader of a much-publicized expedition that had been plowing the Atlantic off the Newfoundland coast since July [1980], was searching for the storied liner that sank on its maiden voyage in 1912. Harris and his crew had good reason for optimism. They carried $250,000 worth of advanced sonar equipment, specially designed under the supervision of Columbia University’s Lamont-Doherty Geological Observatory. They could not miss.

But they did. Late in August the researchers docked in Boston, driven home by bad weather and short supplies — and worse, admitting failure. What the sonar equipment had found was not the Titanic, but a ledge in a deep-water canyon. 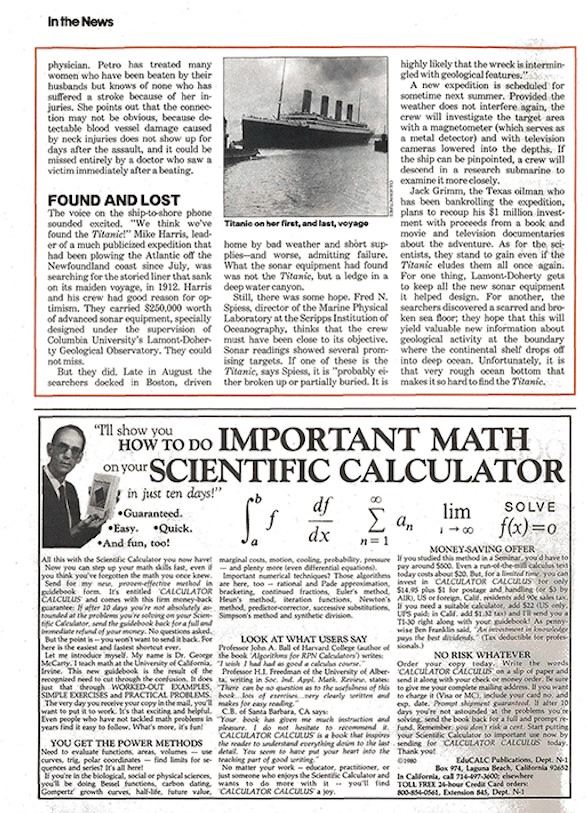 The story as it appeared in the October 1980 issue of Discover.

Still, there was some hope. Fred N. Spiess, director of the Marine Physical Laboratory at the Scripps Institution of Oceanography, thinks that the crew must have been close to its objective. Sonar readings showed several promising targets. If one of these is the Titanic, says Spiess, it is “probably either broken up or partially buried. It is highly likely that the wreck is intermingled with geological features.”

A new expedition is scheduled for sometime next summer. Provided the weather does not interfere again, the crew will investigate the target area with a magnetometer (which serves as a metal detector) and with television cameras lowered into the depths. If the ship can be pinpointed, a crew will descend in a research submarine to examine it more closely.

Jack Grimm, the Texas oilman who has been bankrolling the expedition, plans to recoup his $1 million investment with proceeds from a book and movie and television documentaries about the adventure. As for the scientists, they stand to gain even if the Titanic eludes them all once again. For one thing, Lamont-Doherty gets to keep all the new sonar equipment it helped design. For another, the searchers discovered a scarred and broken sea floor; they hope that this will yield valuable new information about geological activity at the boundary where the continental shelf drops off into deep ocean. Unfortunately, it is that very rough ocean bottom that makes it so hard to find the Titanic. — Discover staff

Crews would spend five more years coming back to shore empty-handed before the RMS Titanic’s ruins were finally discovered on the Atlantic seafloor. On Sept. 1, 1985, the research vessel Knorr, towing a remote-controlled deep-sea camera called Argo, spotted the first signs of the ship’s wreckage off the coast of Newfoundland.

But the crew of the Knorr, led by oceanographer Robert Ballard, hadn’t officially set out to hunt down the famous vessel — though Ballard had searched for it before. The crew had been recruited by the U.S. Navy to use Argo to locate the ruins of two submarines that had disappeared in the Atlantic Ocean: the USS Thresher and USS Scorpion. By chance, the Titanic’s watery grave turned out to be between the two sunken subs.

This was during the Cold War, so the sub-seeking mission remained top secret, but news of the Titanic’s discovery broke days after it was found. Ballard tried to keep the coordinates of the ship a secret to prevent scavengers from attempting to excavate its remains. But the location got out, attracting research groups and rich tourists alike, some of whom dove down and took artifacts back to the surface. That was until the wreck came under UNESCO treaty protections in 2012 — a century to the day after the ship sank.

Today, the bulk of the Titanic’s remains still rest at the bottom of the ocean. But what was lost and found might soon be lost again, thanks to a hearty strain of saltwater-dwelling bacteria eating away at the ship’s skeleton. When the ship was first uncovered, its remains were remarkably well preserved. But in 2010, researchers identified a bacterial culprit, Halomonas titanicae, consuming the rusty metal. Scientists predict that the last of the Titanic will disintegrate over the next few decades — leaving us land-dwellers with only piles of recovered trinkets and the stories we tell about the iconic tragedy. — Jennifer Walter