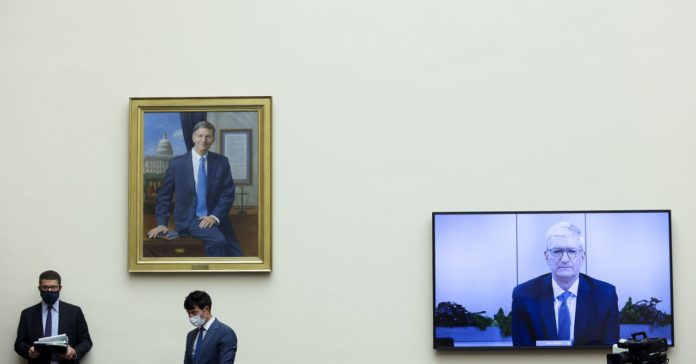 On Wednesday, after a brief delay, the CEOs of Google, Facebook, Amazon, and Apple will testify together in front of Congress for the first time ever. Well, sort of: Thanks to the ongoing pandemic, the executives will appear via video, presumably from some bland settings that belie the fact that the group includes two of the world’s richest people. (And while Zoom has become synonymous with pandemic era meetings, Congress actually uses Cisco’s Webex.) Even so, the event could be historic, with Amazon founder Jeff Bezos making his congressional hearing debut. The theme: whether the four companies, each among the most valuable in history, have built their economic power, or are using it, in ways that harm American society overall.

The four executives will be looking to avoid saying anything damaging on the record. But the stakes are even higher for the lawmakers questioning them. For decades, the Silicon Valley giants have been permitted to expand essentially free from government regulation, and past hearings have given the impression that Congress couldn’t tame them even if it wanted to. During the Cambridge Analytica hearings in 2018, for example, Mark Zuckerberg was able to deflect tough questions, assuring Congress at least 46 times that he would have to get back to them later.

That tactic could be harder on Wednesday, because this time Congress has done its homework. The hearing, by the antitrust subcommittee of the House Judiciary Committee, led by Rhode Island Democrat David Cicilline, caps an investigation that began in June 2019 and has yielded more than a million documents. It will be a major test of whether federal lawmakers finally understand what makes Big Tech tick, and whether they have a vision for how to make it tick differently.

The House effort has been running in parallel with investigations by the Department of Justice and Federal Trade Commission, as well as by the state attorneys general. But there’s a major difference. Those groups are enforcers, meaning their investigations are about whether the big tech companies have broken the law. Congress, on the other hand, gets to write the laws. A key purpose of Monday’s hearing is to determine whether any laws need to be changed to deal with competition problems in the internet era.

All congressional hearings are political theater, and this one will no doubt have its share of grandstanding and partisan bickering. But there’s reason to think it will be on the more substantive side. First, it’s just the 15-member antitrust subcommittee asking questions, not the entire judiciary committee, and they will be looking to enter their juiciest findings into the congressional record. Second, this is an area of relative bipartisanship at a time of historic polarization; while Democrats have been leading the charge, congressional Republicans also have real concerns over the platforms’ effects on competition. (Here we must pause to note that the Republican subcommittee members include Matt Gaetz, whose recent hits include wearing a gas mask on the House floor in early March to mock coronavirus fears, and who on Monday announced that he had filed a criminal referral against Mark Zuckerberg for supposedly lying about whether Facebook discriminates against conservatives. So some chaos is possible, to put it mildly.)