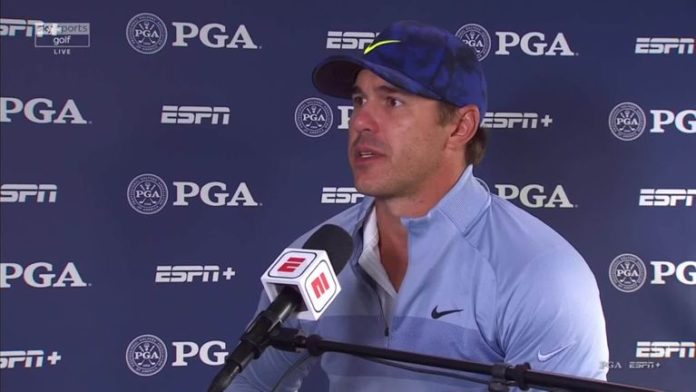 Brooks Koepka played down any concerns about a hip injury and was pleased with his position at the halfway stage of his bid for a historic three-peat at the PGA Championship.

The four-time major champion, looking for a third straight victory of the Wanamaker Trophy, received treatment three times from his trainer, Marc Wahl, during his second-round 68 at TPC Harding Park.

Koepka – who missed several months of the season after undergoing knee surgery – laid down in the rough by the 12th fairway to get help and stopped twice more over the next few holes, although insists he’s not worried about the pain as he stayed within two strokes of the halfway lead.

“I woke up this morning, it was tight, and worked out and it got even tighter and then we loosened it up,” Koepka explained post-round.

“It was a little tight when I was hitting balls on the range but it’s nothing to be worried about. We’ll loosen it up again and it will be a lot better.

“My TFL [Tensor fascia latae] is usually pretty tight on the side. It just kind of moved to the front and tightened up the front and kind of the inside and groin. It will be fine, it’s something I’m not worried about.”

Koepka followed an opening-round 66 with two birdies in his first four holes on Friday afternoon, before cancelling out a three-putt bogey at the sixth with a two-putt birdie at the par-five tenth.

The world No 6 dropped a shot at the 13th after a wayward tee shot, the hole after Koepka was first treated on the course, only to roll in a eight-foot birdie at the last to head into the weekend on six under.

“It was nice to finish that round with a birdie,” Koepka added. “It got, I thought, pretty difficult from about 11 on. The wind picks up and it’s quite difficult, it’s not an easy golf course.

“You’ve got to find the fairway and then find the uphill putt or hit it close to the pin. These greens are so good, you can make a lot of putts. I hit a lot of good putts today, just didn’t go in.

“I’m pretty happy. I felt like I probably could be ten [under] right now. Hit a lot of good putts, just didn’t go in. A couple of them, if I just hit them, they’re in. But driving it pretty well. The iron play I’m pretty pleased with and I like where I’m at.”