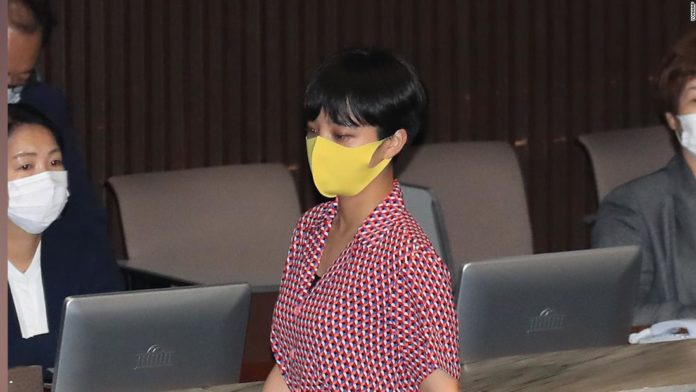 The look in question? A red and white shirt dress.
Not long after lawmaker Ryu Ho-jeong wore the dress to South Korea’s legislative assembly on Tuesday, social media was flooded with misogynistic comments about her outfit, demonstrating something of the sexism that female politicians in the country can face.
Some posters said her look was not appropriate for parliament, where 19% of representatives are women — the largest ever proportion of female lawmakers in South Korea’s legislature, but still low by international standards. Others questioned why she deserved to be in parliament in the first place.
“Soon she’ll come to work in a bikini,” wrote one. “Is this a bar?” wrote another on a Facebook page for supporters of President Moon Jae-in’s left-wing Democratic Party. Some also questioned her age — at 27, Ryu is the youngest member of the National Assembly.
Ryu told Yonhap that she had worn the dress to “shatter the tradition” of lawmakers wearing suits, adding that “the authority of the National Assembly is not built upon those suits.”
But while Ryu’s outfit raised controversy online, it prompted support from both her party and the ruling Democratic Party.
Ryu is a member of the left-wing minority Justice Party, which said that she had been attacked by vitriolic, sexist comments.
“We cannot agree at all with the voice that paints a female politician as lacking qualification by evaluating her look and image rather than her legislative work,” the party said in a statement.
“Women lawmakers are still becoming targets of discussion for wearing pants, or choosing a bright-colored outfit. We express regret at today’s reality in the National Assembly where overbearingly screaming at one another has become natural, while wearing a dress is considered an issue.
“We state that today is year 2020.”
Ko Min-jung — a Democratic Party lawmaker — said that while she didn’t endorse Ryu’s choice of outfit, she didn’t agree with her receiving excessive criticism for what she wore.
“I express my gratitude to her for breaking the National Assembly’s excessively solemn and authoritarian atmosphere,” Ko wrote in a Facebook post.
Although South Korea is a developed economy, many feminists still see the country as a tough place to be a woman.
For the past few years, South Korea has faced a reckoning against its deeply patriarchal culture. Women have pushed back against discrimination in the workplace, sexual violence and harassment, and unreasonable beauty standards. The country continues to rank poorly globally for female representation in government and wage equality.
Nevertheless, even high profile women continue to face sexism. Last year, a top economics professor who studied at Harvard and has served on government committees was told by one right-wing politician to “contribute to the development of the country” by giving birth.