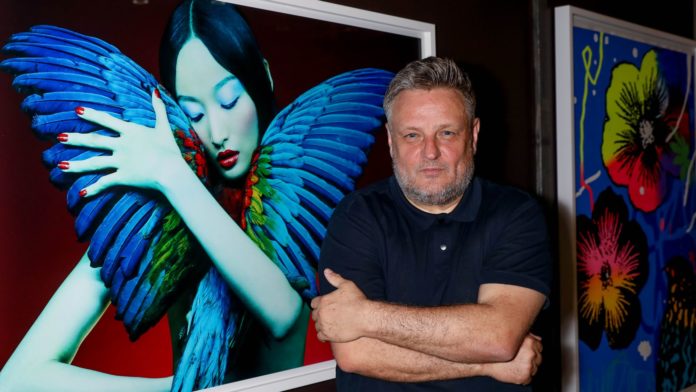 As he talks over Zoom, photographer John Rankin Waddell sits in front of his portraits of the Queen and Rolling Stones musician Ronnie Wood.

“It makes it seem like I’m promoting myself…it just happens to be here,” he says.

“I’m not going ‘Hey, look at these two. This is my friend here and I’m waiting for a CBE.'”

The pair are some of the many celebrities he’s photographed over the years, ranging from fashion icons to musical stars. Rarely do Gordon Brown, Azealia Banks, Kate Moss, and Jay Z all have something in common.

But now Rankin (the only person who calls him John, he says, “is the police”) is looking for photos from the public. His new Sky Arts show is aimed at capturing this unique moment in history.

“Rankin’s 2020 is an open access, crowd-sourced photo programme of six parts, each with a different category,” he tells Sky’s Backstage podcast.

“What I’m looking for is people that haven’t really taken pictures before, as well as professionals and amateurs, [to] make a document of what’s happened in the last six months.”

Photos could have been taken just before or during the pandemic, and can be submitted for consideration for the show by using #2020Rankin on Instagram.

The photographer has come up with six different categories – fun, beauty, family, empathy, self, and nature.

“I think empathy is one of my favourites,” Rankin says.

“We’ve all had to really deep dig deep into kind of how we empathise with people.

“I’m looking for an emotional connection when people take the pictures.

“Think about the camera that you’ve got as a window into your world.”

Rankin himself has recently opened windows into the lives of those on the frontline in the battle against coronavirus.

His most recent project saw him taking portraits of NHS staff, and sharing their stories with the public.

The photographer now says he wants people at home to also document their stories in what he describes as a “first”.

“We can really create a legacy for this period and really, actually, get sort of underneath the surface of the data and all the statistics that we’re always told,” he says.

As well as being known for his skills behind the camera, Rankin is also the co-creator of cult fashion magazine Dazed (then Dazed and Confused), along with Jefferson Hack.

The pandemic has seen print take a hit, most notably Q, which closed publication last month after 34 years. Rankin previously did shoots for the music magazine and says it was a sad moment.

“I think that through this type of adversity, really good things will come out of it. We started Dazed and Confused magazine in a recession during the late 80s, early 90s,” he says.

“I think it does create the atmosphere and the right alchemy to be very, very creative.

“What I love about this project is it’s really a kind of call to arms to go. Get out there and do something, take some pictures or go back and look at what you shot and see and consider it.

“When you look at your own work,” he adds, “when I look at my archive, it compels me and excites me and inspires me to go and do more work.”

Authenticity is key for this project, he indicates. He’s less of a fan of “two-dimensional, selfie surface, filter stuff”.

“People are becoming authentic. They’re telling their own stories.

“That power is something I want them to harness.”

Rankin’s 2020 will air on Sky Arts this September when the channel becomes free for everyone across the UK to watch on Freeview. It will also be available on streaming service NOW TV.

You can listen to more of Rankin’s interview on this week’s edition of Backstage, Sky’s entertainment podcast.