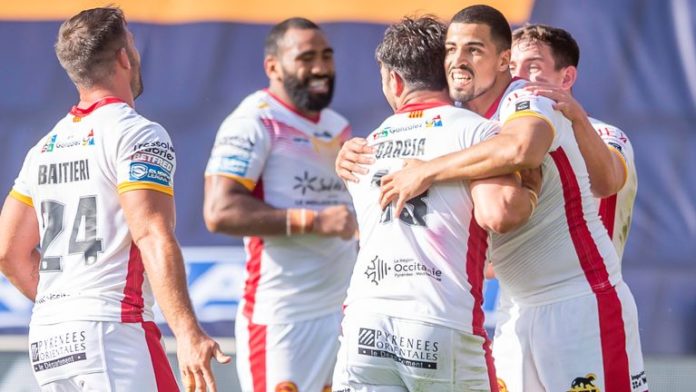 Israel Folau scored one try and created three more as Catalans came from behind to beat Castleford 40-14 at Emerald Headingley Stadium.

The controversial cross-code star kickstarted the Dragons’ fightback after they found themselves 14-0 after 15 minutes.

Two tries from Castleford captain Michael Shenton got the Tigers off to a flier, with Danny Richardson kicking both conversions and a penalty.

But Folau got Catalans up and running on 22 minutes when his break created Tom Davies’ first try, the winger powering over in the corner.

Alrix Da Costa dummied over from close range after Castleford centre Peter Mata’utia was sin-binned for a dangerous tackle.

Catalans then scored a brilliant try from the kick-off, Folau skipping past Shenton and bumping off Greg Eden’s tackle for a fantastic score.

Leading 16-14 at the interval, Catalans were gifted a try by Derrel Olpherts after the restart, Benjamin Garcia the grateful recipient after an errant offload from the Tigers winger inside his own in-goal area.

Folau then produced a brilliant high catch and offload to tee up Joel Tomkins, and he was again the creator for Davies’ second try as Catalans cantered towards their fourth win of the season.

Jason Baitieri capped off a brilliant comeback with his side’s seventh try three minutes from time.

Castleford had a dream start as their skipper opened the scoring after winning the race to Jake Trueman’s grubber kick on the last tackle and then took full-back Greg Eden’s pass to grab his second.

Danny Richardson kicked both conversions, adding a penalty on 14 minutes to make it 14-0, and the Dragons were staring at another crushing defeat.

However, Folau stopped the rot when he unleashed winger Tom Davies on 22 minutes for his first try for the club before the Catalans took full advantage of the sin-binning of Castleford centre Mata’utia for a dangerous tackle on Sami Langi.

Replacement hooker Alrix Da Costa squeezed over from dummy half for his side’s second try and the Yorkshiremen were still down to 12 men when Folau broke clean through their first line of defence in spectacular fashion before handing off Eden to score a solo try.

James Maloney kicked his second conversion to edge the Dragons into a 16-14 interval lead and they extended it in fortuitous fashion four minutes into the second half.

Tigers winger Derrell Olpherts safely gathered the ball from Garcia’s kick on the last but inexplicably tried to pass it behind his own line and when the ball went to ground, Garcia was gifted a try.

It was a score that summed up the Tigers’ hapless display as they squandered the chance to go top of the table.

Folau, who scored a try on his Super League debut in a 36-18 win over Castleford in February, showed his class again on 62 minutes when he rose high to bring down Josh Drinkwater’s high kick and offloaded from the subsequent
tackle to get second rower Joel Tomkins over for a try.

It was all Catalans by now and Davies went over for his second try and substitute Jason Baitieri also got in on the scoring act as Castleford wilted in the sun.