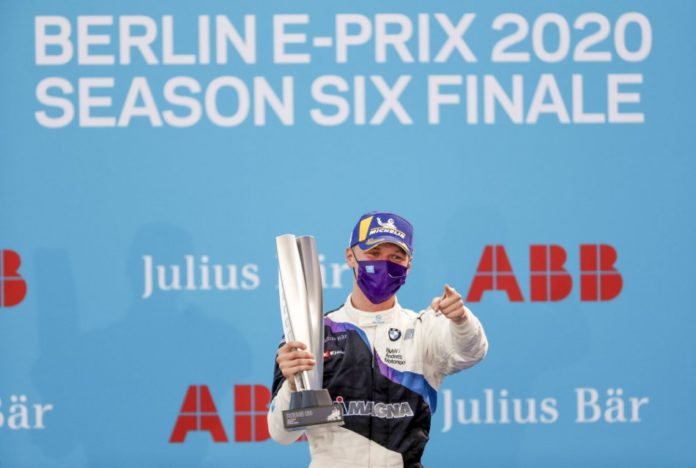 Maximilian Günther pipped Robin Frijns to victory after a stellar drive in round eight of the 2019/20 ABB FIA Formula E Championship in Berlin today (8 August).

The BMW i Andretti star secured his second win of the season by just over a tenth-of-a-second, having chased down pole-sitter Jean-Éric Vergne to pass the DS Techeetah ace with just three laps remaining.

Günther came under intense late pressure from a hard-charging Frijns but was able to hold off the Envision Virgin Racing driver in a drag race to the line.

Vergne finished third ahead of team-mate and championship leader António Félix da Costa, who took another step closer to the title after fighting his way through from eighth on the grid.

Running on the regular circuit configuration at the iconic Tempelhof Airport, having raced the track in reverse last week, Vergne was the class of the field in qualifying and took pole position by nearly half-a-second.

And the reigning champion got off to a flying start when the lights went green, pulling out a two-second gap at the front of the field after a single lap.

However, the Belgian struggled to live with Vergne’s early pace. Despite an average launch, Günther wasted no time fighting back and found a way past D’Ambrosio on the second lap with a well-judged move.

The German soon set about hunting down Vergne and quickly closed the gap at the front before the race was neutralised by the safety car following a collision involving James Callado, Sérgio Sette Câmara and Neel Jani.

Günther kept the pressure on at the re-start and came close to passing Vergne, only to lose three places after taking ‘ATTACK MODE’.

This didn’t deter the 23-year-old, who swiftly dispatched the Mercedes-Benz EQ of Stoffel Vandoorne then found his way past Frijns to latch back onto the leader’s tail with some breathtaking driving.

Günther even briefly found himself at the head of the race after Vergne enabled ‘ATTACK MODE’, but the Frenchman pulled off a cut-back pass to regain the advantage once more.

The BMW i Andretti star did finally make a move stick with three laps remaining and just about had enough energy in reserve to stave off a late challenge from the rapid Frijns.

Vergne faded in the final laps but managed to remain ahead of da Costa, who had carefully picked his way through the field with some clinical overtakes – including a brilliant dummy pass on Mahindra’s Alex Lynn.

Da Costa is now 68 points ahead of his nearest rival Günther – who jumped from ninth to second in the standings after his win – and the Portuguese driver can wrap up the title tomorrow if results go his way.

André Lotterer brought his TAG Heuer Porsche home in fifth, climbing his way up from seventh on the grid, while Oliver Rowland benefitted from Vandoorne suffering a left-rear puncture to secure sixth for Nissan e.DAMS.

D’Ambrosio finished seventh ahead of Lucas Di Grassi, with the Audi Sport Abt Schaeffler team leader recovering well from a half-spin following contact, while Panasonic Jaguar Racing’s Mitch Evans was in superb form to secure ninth after starting 19th on the grid and Alexander Sims rounded out the top ten.

The breathless end to the 2019/20 season continues tomorrow (Sunday, August 9) with round nine of the championship, but can da Costa clinch the crown?

“It was important to qualify on the front row, or at least close to the top drivers. The race was very close until the end and we managed it very well. We dropped one place at the beginning, but we kept cool and recovered the position. Robin came from behind and I knew he had more energy. So, I had to be quick to make the move on JEV and it paid off. I’m incredibly happy for the team, myself and everyone to win this home race here in Berlin!”

“It feels really good to be back on the podium. It’s my first time this season, which has been quite a strange one so far, but we had a good race today. We were really good on energy halfway and also at the end. Guenther and JEV were fighting a lot and when that happens you sit back and see what comes next. I knew I could overtake at the end, so I tried to save as much energy to make it to the finish line. I’m pleased with the result today. The team did a good job and I’m really happy to be back.”

“We did good to get a podium finish today. I don’t know what happened, but we need to investigate on the energy management after taking ATTACK MODE, since that made me struggle quite a lot at the end of the race. I was fighting with Max for the lead but when I saw Robin coming, I thought it was useless fighting, as that would have meant losing the podium for me. We still have some work to do ahead of tomorrow to win the race. But it’s good to be back on the podium.”