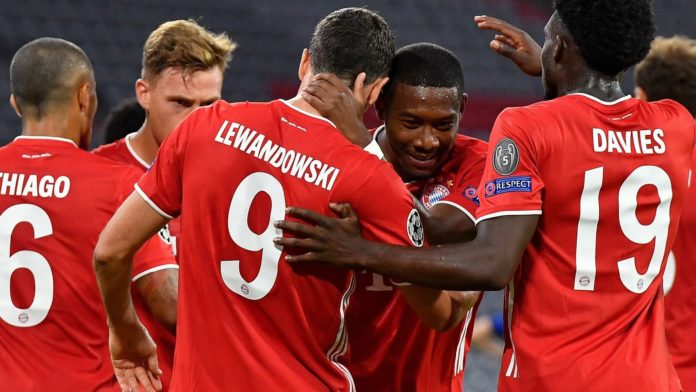 Bayern proved far too strong for Chelsea again as Robert Lewandowski starred in a 4-1 win at the Allianz Arena (7-1 on aggregate) to reach the Champions League quarter-final.

Chelsea had a mountain to climb even before Bayern raced into a two-goal lead through Robert Lewandowski’s penalty (10) and Ivan Perisic’s simple finish (24), but the Blues clawed back some pride with Tammy Abraham’s close-range goal from Manuel Neuer’s error (44).

Lewandowski, who had assisted Perisic, made the third goal for Bayern too, crossing for the unmarked sub Corentin Tolisso to finish from close range (76), and the Polish striker hit his 53rd of the season with an emphatic header (83).

Bayern will now play Barcelona in the quarter-final on Friday in Lisbon, with the winners of that game facing either Manchester City or Lyon on August 19 in the semi-final.

Frank Lampard’s promising first season at Chelsea finishes with two disappointing defeats, following their FA Cup final loss last weekend, while it will take a fine team to stop Bayern in Lisbon as the Champions League reaches a unique finale.

Man of the match: Robert Lewandowski

How Lewandowski and Bayern breezed past Chelsea again

The more optimistic Chelsea fans had reason to be hopeful after sensational comebacks from English teams in last year’s competition, but this was a step too far for Lampard’s men against a Bayern side who attacked at will.

Bayern won a penalty early on as Lewandowski was found through on goal; he rounded Willy Caballero, was hauled down, and though offside was initially given, VAR found Emerson was playing him onside. Lewandowski stepped up and perfectly found the corner for his 52nd goal in all competitions this season.

It was soon 2-0 as Bayern somehow found themselves four vs two in the final third, allowing Lewandowski to feed Perisic on the right of the box unmarked, and he slotted low into the right corner of the goal past Caballero.

Chelsea were struggling to get a grip of the game, but thought they’d halved the deficit on the night through Callum Hudson-Odoi’s curling effort from 20 yards, only for VAR to find Abraham offside. But Abraham did make up for it a minute before the break, tapping home from close range after Neuer had made a hash of Emerson’s low cross.

Mason Mount tested Neuer from an angle after the break, but the better chances kept falling to Bayern as Kurt Zouma brilliantly before Thomas Muller got his footing wrong as he struck into the ground and over the bar from close range.

Bayern moved up a gear in the closing stages as Lewandowski contributed to their third, finding Tolisso completely unmarked in-between the static Emerson and Zouma, and the Frenchman did the rest, piling into the net from close range.

Chelsea made six changes from the FA Cup final defeat a week ago. Jorginho, Pulisic, Alonso and Azpilicueta were out, while Rudiger and Giroud dropped to the bench. Coming in were Christnesen, Kante, Barkley, Hudson-Odoi, Abraham and Emerson.

Bayern opted for Ivan Perisic over Philippe Coutinho to replace the injured Kingsley Coman. Otherwise, it was a predictable and strong Bayern line-up.

Lewandowski, who had a hand in all seven goals across the two legs, rounded off the victory with a thumping header late on, climbing above his own men to convert into the right corner from an Alvaro Odriozola cross.

What the manager said…

Chelsea boss Frank Lampard told BT Sport: “It’s not a slight work in progress, It is a work in progress. It is not the norm for Chelsea. In the last 20 years we had players, teams with prime Hazard and Costa, prime Cech, Terry and Drogba. Competing for the Premier League title year on year, getting to finals and semi-finals regularly. We know that’s not the case [now].

“We lost the best player in the league pretty much in Eden Hazard. People would not normally commend coming fourth for Chesea, we want more but the feeling is we have achieved something with the group we have. Now is the time to think where we can improve.

Robert Lewandowski was directly involved in all seven of Bayern Munich’s goals against Chelsea in the Champions League this season (3 goals, 4 assists). He is the first player to register both 3+ goals and assists against an opponent in a season since Luis Figo in 2004/05 vs Roma.

And the Polish striker has scored in 25 home Champions League matches and ended on the winning side in all 25 games (5 for Borussia Dortmund, 20 for Bayern).

Chelsea conceded seven goals in a two-legged European tie for the first time in their history; their six-goal margin of defeat on aggregate is the second-worst by an English club in the Champions League, behind only Arsenal’s eight-goal aggregate loss also against Bayern Munich in 2016/17 (10-2).

Liverpool fans may have had a keen eye on midfielder Thiago on Saturday evening, heavily linked with a move to Anfield this summer.

And they’ll have liked what they saw. The 29-year-old Italian-born Spain midfielder showed glimpses of quality throughout, dropping deep in between centre-backs to become the playmaker, and often dictating the play from either side of the halfway line.

Chelsea didn’t press an awful lot, which may have helped, but Thiago looked like he continuously gave himself time on the ball with his first touch, and routinely broke the lines with a zipped ball into feet so the midfielders in front of him could turn and face goal.

He has a nice variation of pass, but perhaps most impressively, his tracking stood out. He made a last-ditch tackle to deny Ross Barkley a clear shot on goal in the box, and also stuck a hard but fair cruncher on Mateo Kovacic.

Laugher: I almost quit diving due to mental health struggles

Racing League week two: Ones to watch and lively longshots