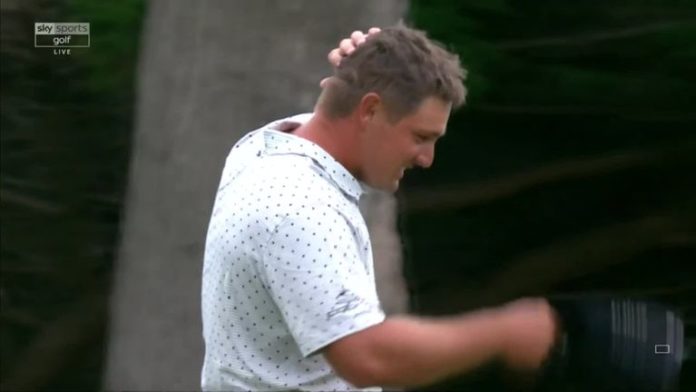 Bryson DeChambeau remains in the hunt for a maiden major title after a remarkable finish to his third round at the PGA Championship.

The world No 7 posted a four-under 66 to move up a congested leaderboard at TPC Harding Park, where DeChambeau waited until his final putt of the day to deliver his standout moment.

Playing alongside Patrick Reed, DeChambeau got off to a fast start and followed a 15-foot birdie at the third with back-to-back gains from the seventh, only to drop a shot after failing to get up-and-down from a greenside bunker at the ninth.

DeChambeau rolled in a close-range birdie at the 10th to make further inroads on halfway leader Haotong Li, before cancelling a bogey at the 12th by holing a 30-footer at the 14th and picking up another shot at the 16th.

The five-time major champion bogeyed the 17th and missed the short grass with his tee shot into the par-four last, with Koepka then sending his approach to the front edge of the green and nearly 100 feet from the flag.

Left with a seemingly tricky two-putt to avoid a bogey-bogey finish, DeChambeau looked on in disbelief as his effort negotiated three different ridges and rattled in the middle of the cup for an unlikely birdie.

“I just said to myself, well, I think this line looks pretty good,” DeChambeau said after his round. “We’ve been doing a lot of speed testing out there so I knew I had to hit it like 130 feet relative to all of our stuff and you know for me I just felt like I hit it 130 feet.

“I was able to start it on line and saw it kept going closer and closer to the hole and eventually dropped. Those moments, you just have to look back and laugh and appreciate what the game is, because that stuff happens at random points and this was a pretty good random moment to do it in.”

Click on the video above to see DeChambeau’s monster birdie!