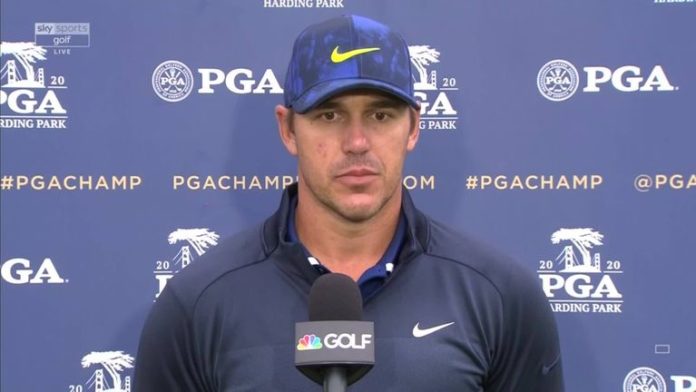 Brooks Koepka sounded a warning to his many rivals in contention for the PGA Championship title and declared: “I like my chances”.

Koepka vowed to cut out the mistakes which blighted his third-round 68, in which he was tied for the lead until he stumbled to three consecutive bogeys on the back nine before he resurrected his bid for a third straight victory with two birdies over the final three holes.

The American’s excellent finish hauled him back to within two shots of the lead, held by Ryder Cup team-mate Dustin Johnson, while he also insisted the hip injury that forced him to call for treatment three times on day two had not been an issue on a chilly Saturday at TPC Harding Park.

“I’m playing good so I like my chances,” said Koepka, who shares fourth place on seven under par alongside Collin Morikawa and Paul Casey. “I just need to put the ball in the fairway a few more times and not in the semi.

“It’s just a comfort level. I feel very comfortable around the lead in the big events. Obviously we don’t have fans here, which I think makes it a little different when they’re hooting and hollering. That can be fun if they’re cheering for you, but if they’re against you it’s not so much fun.

“It’s going to feel completely different than any one we’ve ever played, but I’m looking forward to it tomorrow. It should be a fun shootout.”

Koepka was two under for the day through a blemish-free 12 holes before his problems started at the 13th, although he played down the significance of his three straight bogeys and insisted he felt hard done by.

“I thought I played a lot better than my score reflected,” he added. “I really only made one bad swing, but I left it in a good spot and just hit a poor chip. The other ones I was in the semi a lot, and I think sometimes in the semi, it can come out without spin or it can come with spin, and if you’re going to do that in the wind, it’s kind of tough to judge.

“Maybe took a little bit too aggressive lines on those out of the semi, I just missed them in the worst spot possible, but they were good shots, so I felt like I played really well, putted really well, and the driver I hit great. It’s just sometimes they didn’t move with the wind, hit them too good.”