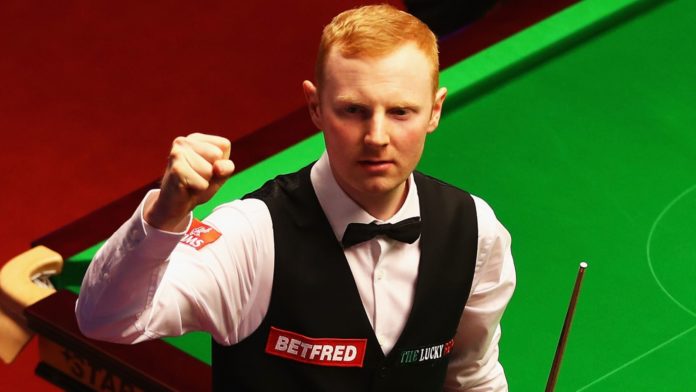 Jamie Clarke and Anthony McGill became involved in a heated confrontation in their World Championship second-round encounter at the Crucible, where Ronnie O’Sullivan and Ding Junhui were deadlocked at 8-8.

Trailing 7-2 in the afternoon session, McGill accused Clarke of deliberately standing in his eyeline as the Scot prepared to play a long yellow from the baulk end.

Referee Jan Verhaas came between the qualifiers and ordered Clarke from the other end of the table, directing him to his chair.

Television coverage picked up Verhaas telling Clarke: “Listen, listen, it’s no big deal, but if you’re in his eyeline we’d prefer you to be on that side.”

As an animated McGill continued to confront his opponent, Verhaas told the Scot: “Leave it, leave it,” before Clarke won the frame on the black and left the arena, with McGill running out after him.

Clarke tweeted cryptically “You want to dance, let’s dance” during an interval but the incident clearly fired up McGill, who won five straight frames to close to only 8-7 behind.

You want to dance, let’s dance

O’Sullivan and Ding resumed having shared the first eight frames and neither could move into the ascendancy on Saturday afternoon.

O’Sullivan inched ahead in a scrappy opening frame in which both players were unable to find any fluency but Ding, the 2017 finalist, followed up a break of 64 with back-to-back centuries to move 7-5 ahead.

O’Sullivan responded to going down with breaks of 90, 89 and 73 to establish an 8-7 lead but Ding rallied with 41 and 53 to level proceedings and leave their match finely poised heading into the conclusion on Sunday evening.

Neil Robertson spilt coffee on himself before the start of his match against Barry Hawkins, who sat in the wrong chair, leading to a couple of delays on Saturday morning.

Neither Robertson nor Hawkins were at their best through a tense afternoon session, but things improved in the evening.

Both players found their groove, with Robertson hitting two centuries and a break of 93, but Hawkins’ crucial 117 in the final frame of the night ensured it was level at 8-8 going into Sunday’s deciding session.

Meanwhile, Kyren Wilson, who was given a first-round bye after Anthony Hamilton’s withdrawal from the tournament, is just two frames away from the quarter-finals after opening up an 11-5 lead over Martin Gould.