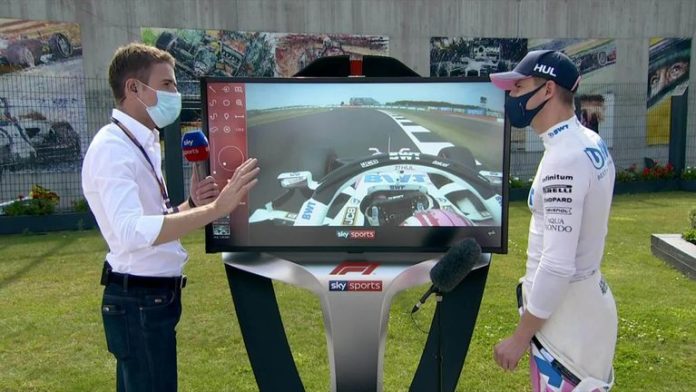 Nico Hulkenberg and Lewis Hamilton can achieve contrasting – but significant – F1 podium landmarks in the sport’s 70th Anniversary GP at Silverstone on Sunday in a race that offers bags of promise.

On the day Hamilton can match Michael Schumacher by claiming a record-equalling 155th appearance on an F1 rostrum, Hulkenberg has a chance from a remarkable third on the grid to finally join the list of Grand Prix podium finishers – at the 178th attempt.

The German, subbing for Sergio Perez for the second consecutive weekend, is the holder of one of F1’s unwanted records, the most starts without a top-three finish.

“I knew this was going to come up now,” replied a seasoned Hulkenberg in the post-qualifying press conference when asked the prospect of finally ending his wait on Sunday.

“To be honest, it’s very challenging and difficult circumstances but I know I have a fast car beneath me. So it’s just trying to make sure to do everything right.”

Hulkenberg certainly did everything right in the final part of qualifying in a run to the head of the second row that saw him outqualify Red Bull’s Max Verstappen and Racing Point team-mate Lance Stroll, who starts sixth.

But although this is the German’s second weekend in a RP20 he had never driven before last Friday, he has yet to race it after technical problems meant he was unable to take the start of last week’s British GP.

The 32-year-old is aware the 52 lap-race represents a fresh challenge for him.

Asked in a SkyPad appearance with Sky F1’s Paul Di Resta what he expected in the race, Hulkenberg replied: “A very difficult Sunday personally for myself. I have huge respect for the race.

“Obviously one lap is one lap – we all know that’s more manageable and easier. But then in the race, there are so many little things about feeling, about knowing the car with the tyres and everything. So I’ll try to do my homework and then be out there on the battlefield.”

“To go from being called back and not being able to start one race, then a podium – that would be a fairytale for him,” acknowledged Szafnauer to Sky F1.

“But we have very competitive people around him. The competition is immense where we are and he’s going to have to beat Lance too, which is not going to be easy for Nico. Lance is fit, he’s fast, he’s raced her last weekend, he’s got all that experience under his belt, so it’ll be a big fight.”

Bottas vs Hamilton: Can Valtteri convert from pole?

Although Hulkenberg will start with only two cars in front of him, the prospect of challenging either of them is unlikely with Mercedes remaining the dominant class of the field in F1 2020.

For the first time since the season-opener in Austria, it is Valtteri Bottas who starts at the head of the field after the Finn pipped Hamilton to pole position at the Briton’s home track.

Bottas lost crucial ground in what is proving an exclusive title fight last Sunday, when he dropped out of second with two laps to go via a puncture, and trails Hamilton by 30 points heading into the race.

“I had a good start last weekend so I see no reason why I couldn’t have a good start,” said Bottas.

“My pace was all good through the race last weekend but now we have different [tyre] compounds so of course there is some more management required in certain places of the track for those and strategy is going to different than last weekend.

“So I just need to keep focused and keep focussing on the important things.”

Sitting next to his team-mate after qualifying in the post-session news conference, Hamilton kept his answers short but made clear: “Still got a long race tomorrow and I will bring everything I can to try and beat this guy.”

The field is expected to complete two pit stops during the 52-lap race this week with Pirelli having brought softer compounds to the second leg of the unprecedented Silverstone double-header, with most expected to shun use of the brittle soft compound completely.

Can Verstappen make ground on the hard tyre?

In a race that could throw up strategic variation, Red Bull’s Max Verstappen could be the driver to watch on this front after the Dutchman locked himself into a race start on the hardest Pirelli compound available – the only driver to do so in the top 10.

“I think it could be good,” said Hamilton of his rival’s choice. “Gives a bit of a difference, it will make it more interesting.”

Verstappen, who starts fourth and will be at least eyeing the final podium spot from Hulkenberg, is optimistic it will widen his race options.

“The hard tyre was last weekend’s mediums, so I don’t think it’s going to be that bad compared to what they’re starting on,” explained Verstappen to Sky F1.

“Of course, you might lose an initial bit in the initial launch but I think it’s going to be better for the first stint. It’ll depend on whether there are Safety Cars or not so we’re going to have to wait and see. But at least it’s different to what other people are doing around me and we’ll see if we can do a better job.”

He added: “I don’t expect too many issues with the cars behind me.”

The cars behind include former team-mates Daniel Ricciardo and Pierre Gasly, who impressed for Renault and AlphaTauri to take fifth and seventh on the grid respectively, and both Ferraris on another sobering Saturday for the Scuderia.

Charles Leclerc was their only representative in the top 10 in eighth with Sebastian Vettel out in Q2 and starting 11th amid a continuation of his Silverstone woes from last week.

“I expect us to struggle,” admitted Leclerc. “Seeing as our weakness is to manage the tyres, and seeing the degradation we’ve had with this softer compound, I think it’s going to be difficult.”