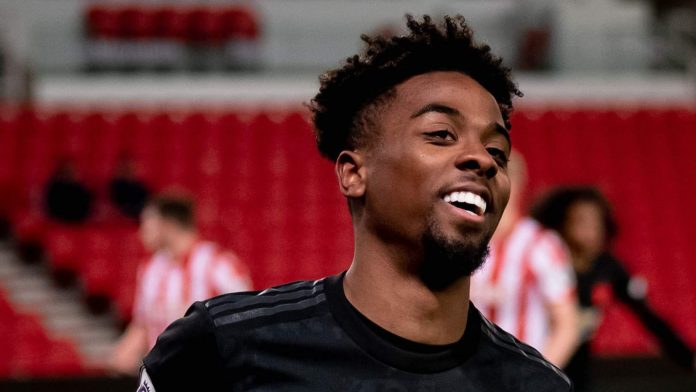 Lille have confirmed the signing of Angel Gomes on a five-year deal, following the midfielder’s departure from Manchester United in July.

As previously reported by Sky Sports, the 19-year-old has been immediately loaned to Boavista after joining the Ligue 1 side.

Gomes left Manchester United on July 1 when his contract had finished after rejecting a new deal to stay at the club.

He began his career at Old Trafford at the age of five and made his first-team debut in May 2017, becoming the youngest player to play for the club (at 16 years, 263 days old) since Duncan Edwards in 1953.

Opportunities, though, were limited for Gomes, a World Cup winner with England U17 in 2017.

🔴 We’re delighted to officially announce the signing of @England U20 attacking midfielder Angel Gomes in a deal that runs until 2025. Angel will spend the 2020/21 campaign on loan at @boavistaoficial. #NewPlayerDetected #MercatoLOSC pic.twitter.com/5qAhWvgrjj

He made just eight appearances for Ole Gunnar Solskjaer since he replaced Jose Mourinho as manager in December 2018 and had yet to make a Premier League start.

United wanted Gomes to stay at the club and fulfil the potential that saw him win the Jimmy Murphy Young Player of the Year Award in 2017.

The first place to start when discussing just how and why Angel Gomes left Manchester United is to make it clear that people at the club, including Ole Gunnar Solskjaer, wanted him to remain at Old Trafford.

United wanted Gomes to continue his development after becoming the first player born in the 21st century to play for the club in the Premier League.

I guess that begs the question, then, why a career that started at United for Gomes as a five-year-old in 2006 has come to an end this week? The answer probably has many strands to it.

There was a deal on the table from United for a long period of time and after signing up other youngsters recently, it was hoped that Gomes would follow suit by putting pen to paper. But the numbers didn’t add up for the 19-year-old and his advisors.

Solskjaer became irked at the frequency of questions about Gomes’ future in recent days, partly because no progress had been made on agreeing a deal and also because he wanted to retain the player in his first-team squad.

It’s fair to say a long drawn-out contract dispute wouldn’t have helped the midfielder’s case for selection with Solskjaer demanding commitment and loyalty from members of his squad but that doesn’t mean to say that Gomes’ pedigree and the achievement of captaining England’s U17s to the World Cup in 2017 weren’t appreciated, they were.