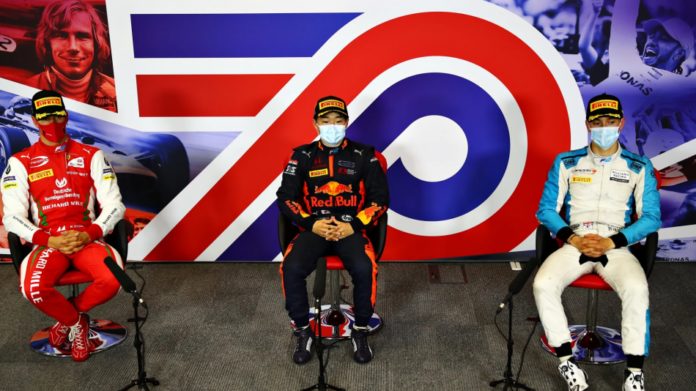 FIA Formula 2: Hello and welcome to the press conference with the top three finishers in today’s FIA Formula 2 Sprint Race here at Silverstone. We are joined by race winner Yuki Tsunoda for Carlin, in second place is Mick Schumacher for PREMA Racing, and third is Jack Aitken for Campos Racing. Yuki, your first victory in Formula 2. Just how good does that feel?

Yuki Tsunoda: Yeah, I’m really happy. I think it’s a good step for Carlin as well, and myself. I could have already been P1 in Austria, but after that we struggled quite a lot. I’m happy to be back on the podium, especially on the top step, and so a big thanks to the Carlin team.

FIA Formula 2: You said after the race that it was a little bit luckily with the collision, but you were sticking close to the PREMAs throughout the final part of that race. Did you think you had a chance to overtake them, even if they hadn’t collided?

Yuki: Yeah. Robert (Shwartzman) was struggling quite a lot at the end on his tyres. For sure, I think I could have overtaken Robert, but I don’t know about Mick. We were on quite a similar pace at the end. It wouldn’t have been easy to overtake either of them if the race had played out normally. I think I still had really good pace after I passed both PREMAs, so there was the potential to still be P1. It was a bit lucky to overtake both PREMA guys in that situation, but I’m pretty happy with it.

FIA Formula 2: Well done today. Mick, moving on to you. You were very apologetic over the team radio, but the Stewards have investigated the incident and decided to take no further action. Just talk us through that move from your perspective, and why you were so apologetic.

Mick Schumacher: Obviously, you never want to collide with your teammate. That’s the last thing you want to do. In this case, it’s very hard to judge distances in the cockpit, especially with the mirrors that we have. They’re a very rounded shape so it’s quite difficult to judge how far the opponents are behind or whatever. As I said, I have to see the outboard, see how it was, and then take further discussions with the team. I’m obviously very apologetic if I did something wrong. In case I did, I’ve already apologised.

FIA Formula 2: You were coming on very strong at the end of that race through and looking like you were going to pass Robert. Are you frustrated to be sat in second place and not take victory today?

Mick: Yeah obviously. P1 was easily possible. I think the tyre management that we had, and the car that PREMA gave me, was amazing. We’ve struggled a lot with it last weekend. We made a big step forward for the Feature Race and now, with the cooler temperatures, things were a bit easier to handle. I’m really thankful to the team to give me that car and put me in a position to take race victory.

FIA Formula 2: Well done today. Jack, moving on to you. That seat has become your own this weekend – three press conferences, three third places. You join Mick as the only other driver to have two podiums in a race weekend so far this season. Just how happy are you with your return?

Jack Aitken: I’m really happy. I’m not sure who these guys are though. I thought it would be Callum (Ilott) and Christian (Lundgaard) again! We were joking at the start of the weekend that I’d forgotten what it was like to be in the top three, so it’s nice to be pretty emphatic this weekend and bounce back the way we have as a team. I’m really pleased, and to do it at a home Grand Prix as well.

FIA Formula 2: You mentioned Christian there. He had a front-left tyre failure, and it looked like you were struggling for pace compared to the top three at one point. Just how tough was it out there today?

Jack: I think, as it’s been pretty much all year so far, it’s been really tough. I haven’t seen it, but Christian was behind me at the first part of the race and pushing fairly hard. I saw him start to struggle a little bit, and then obviously he disappeared. It’s a bit unfortunate, but the tyres were not easy. I was trying to attack Yuki at the start, but with hindsight that was a bad idea, given the pace he had. I just settled in to try and control the tyres at the end. The guys behind me were struggling as well. I was hearing there were lots of people struggling with graining, so it was a bit of a race of attrition.

FIA Formula 2: Well done, and congratulations on a strong weekend. Yuki, just returning to you. This first win, how important is it for your personal confidence in your first season in Formula 2?

Yuki: First of all, I think at the beginning of the season I struggled to keep my front wing until the end of a race! For that I made a big step from last week, and I didn’t lose it! The race pace, especially from last week’s Feature Race… We had a really good car to manage the tyres and came P3 from P9. This weekend it was P10 to P6, always gaining positions. We’ve a really good strategy and a good car. I think for sure, for the future it’s good for confidence. We need to improve our Qualifying pace to make the races easier and help take podiums. Still, there’s a lot of things to improve but it’s a good step for Carlin and me.