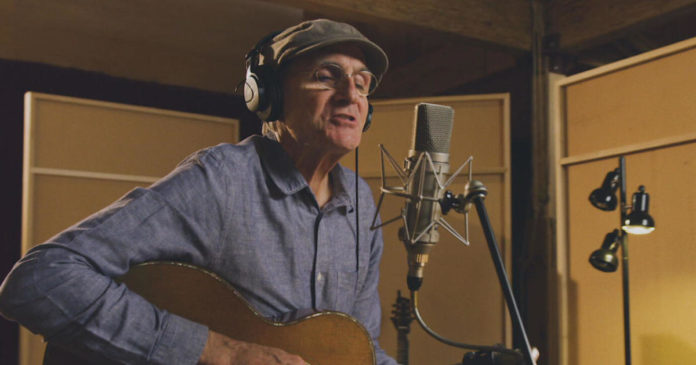 An earlier version of this story was originally broadcast on February 2, 2020.

“I don’t sit still very well,” said singer-songwriter James Taylor. “And so, I need to have something to occupy me, particularly if I’m trying to concentrate on getting some work done or something.”

Before Taylor can kindle the flames of his imagination, he likes to split kindling for his own little fire in the wood stove of his studio in Lenox, Massachusetts.

He demonstrated splitting wood for “Sunday Morning” anchor Jane Pauley. “Where’d you learn to do that?” she asked.

“I grew up in the sticks,” he replied. “Didn’t you have fires as kids?”

“James, I had a suburban childhood. We were girls. We didn’t start fires.”

Then, he takes a blowtorch (“This is cheating, of course”), and voila!

At 72, Taylor is as busy as ever, whether it’s recording and producing his own albums, or building his own echo chamber from an old shipping container: “There was something about the actual thing of having an echo chamber that all the old recording studios used to have.”

Another project: a deep dive into the wellsprings of his own creativity, an audio-only memoir about his early days and growing up in North Carolina with his parents and four siblings:

“We were kind of isolated out there. As kids we seemed to have hours of empty time. A fantasy could last all afternoon. I don’t think I would have become a songwriter if I had not had all of those free days to let my imagination roam.”

Taylor was 19 when he wrote “Carolina in My Mind,” during a trip to Spain, where he met a girl named Karin. “And as the sun came up, the first verse came to me,” he said.

Karin, she’s a silver sun
You best walk her way and watch it shine
Watch her watch the morning come
A silver tear appearing now
I’m cryin’, ain’t I?
Gone to Carolina in my mind

“Did you say, ‘Karin, do you have a pencil?'” Pauley laughed.

“I may well have,” he replied.

The memoir is called “Break Shot: My First 21 Years.”  Taylor explained: “A lot of pool ball games start with a break shot. You just smack that triangle of balls and they go off in all different directions. Well, what that refers to is that there was a moment in my life, and my family’s life, and in the popular culture, we just jumped the tracks, you know, all at once.”

“You know, my father’s alcoholism, I think, reached a peak. And that led to my folks breaking up. And I was, I think, a very sensitive kid, and was away at school, deeply unhappy, and so I left school and went to a psychiatric hospital in Boston called McLean and spent 10 months there.”

A turbulent time for a very young Taylor, but a remarkably creative one, pain and longing finding its way into his songs.

James Taylor performs “Fire and Rain” in this 1970 concert:

Before he was 22, he’d been signed by The Beatles for their brand-new label, Apple, and his second album, with songs like “Fire and Rain” and “Sweet Baby James,” landed him on the cover of Time magazine.

Taylor told Pauley, “You know, that’s a song I’m proud of. I think it came out really well, and I worked hard on it.

“Both verses were written behind the wheel of an automobile. In the first case, driving south to see my family in North Carolina and to see my older brother’s baby, named after me, little baby James. And then the second half was written driving on the turnpike from Stockbridge to Boston.”

“There’s the matter of the drug thing,” Pauley said. “And I’m a little concerned that you were on the road driving to North Carolina and you probably shouldn’t have been driving?

“No, that’s probably true!” he said. “I probably shouldn’t have been driving.”

“You know, I never saw, certainly, being this age and still doing what I do at this age. That’s remarkable, too.”

Life these days is pretty sweet for James Taylor. His two oldest children, Ben and Sally, are established musicians. His twins, Rufus and Henry, who were six when “Sunday Morning” last visited with the Taylors, are heading off to college. And he’s been happily married to Kim for nearly two decades.

Kim makes a cameo appearance in another musical adventure in progress: “I corralled her into singing on ‘Surrey With the Fringe on Top,'” Taylor said. “She is really good. She did that, just knocked it off in an afternoon, too!”

The new album, “American Standard,” is a collection of songs he grew up with and still loves.

“These are songs I’ve known since I was a kid, all of ’em,” he said. “I used to listen to my parents’ record collection, just endlessly. You’d lie on the floor, usually on a carpet, look out the window, look at the album cover and read it through a couple of times but then just gaze at the art and, you know, just listen to the music.”

“And that’s how it got imprinted? It’s permanently engraved?” asked Pauley.

And now his songs are permanently engraved on our imaginations.

Next year, he’ll be out on tour again … a troubadour who still loves what he does.

“It’s undeniably revitalizing to have the audience react to a song that they came to hear,” Taylor said. “Some people love [touring], and other people are sort of worn down for it.

To stream James Taylor’s album “American Standard,” click on the player below (Free Spotify registration required to hear the tracks in full):