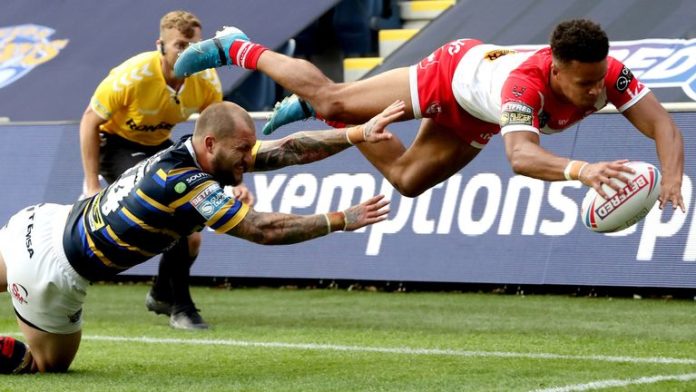 Regan Grace scored a spectacular hat-trick as St Helens made it two wins out of two following the resumption of Betfred Super League with a 48-0 rout of Leeds.

Grace stole the show at Emerald Headingley with two length-of-the-field tries and an acrobatic finish, all of which would have brought the crowd to its feet had there been one.

Even veteran prop James Graham got in on the scoring act with his first Super League try for nine years and full-back Lachlan Coote kicked all eight conversions in a 20-point haul as the champions climbed up to second place in the table.

Leeds coach Richard Agar was forced to shuffle his side after losing four players to injury and they never really got going as they were nilled at home for the first time for 28 years.

Saints were easily able to shrug off the absence of England centre Mark Percival as they showed their class.

The foundations were laid by England prop Alex Walmsley, who created the position for fellow front rower Graham to go over for the opening try before producing another trademark charge to score the second, taking three bemused defenders over the line with him.

With Coote converting both, Saints led 12-0 after 14 minutes and never looked back.

Coote enabled Tommy Makinson to go over on the overlap for a third try and Grace began his remarkable feat with a 95-metre score that illustrated the pace and evasive skills that make the Wales international such an exciting player.

The Rhinos fought back from 26-6 down to beat Huddersfield on the same ground a week earlier but there was never a chance of a repeat against Saints, who doubled their 24-point tally after the break.

Grace produced an acrobatic finish after taking Coote’s pass to score his second try after 56 minutes and eight minutes later collected Callum McLelland’s kick behind his own line and weaved his way all the way for another eye-catching score.

As the Rhinos wilted, Walmsley charged past tired limbs to get half-back Theo Fages over and second rower James Bentley broke clear to send Coote over for the visitors’ eighth try.