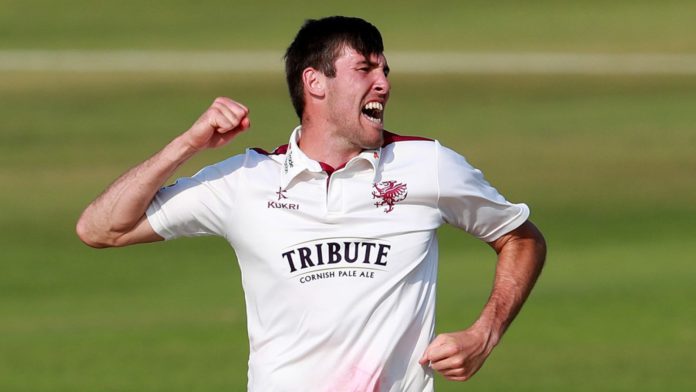 An eventful match finished in suitable style on the second evening as the home team – skittled for 67 on Saturday – lost their final six wickets for six runs in 24 balls to be dismissed for 154, in pursuit of an unlikely victory target of 322.

Overton claimed 4-26, having earlier notched the highest score of the match – 68 from 43 balls – as Somerset posted 222 in their second innings, having resumed on 15-1. Northants vs Somerset scorecard

All-rounder Liam Dawson was stretchered off with what looked a serious Achilles tendon injury to mar a productive day for Hampshire against Middlesex at Radlett.

The 30-year-old, who was part of England’s white-ball squad for their recent one-day international series against Ireland, fell awkwardly while batting during the final session and had to be carried from the field.

Dawson’s attacking knock of 43 had already helped Hampshire take a first-innings lead when he crumpled to the ground, visibly in pain after playing a defensive shot against Tom Helm.

There was a 15-minute delay while Dawson received treatment at the wicket, but it was already evident he would be unable to continue.

Despite that setback, the visitors ended in a strong position on 279-7, leading by 27, with opener Joe Weatherley falling just two short of what would have been his second first-class century and captain Sam Northeast hitting 51. Middlesex vs Hampshire scorecard

Lancashire took control against Durham at Emirates Riverside, building a lead of 104.

Josh Bohannon notched the fifth half-century of his first-class career, scoring a patient 75 to provide the foundation of the visitors’ 284-9 in reply to Durham’s 180 all out. Durham vs Lancs scorecard

Teenager Jordan Cox and winter recruit Jack Leaning notched their first centuries for the county as Kent got the upper hand against Sussex.

The visitors endured an 85-over day in the Canterbury dirt for only one wicket as Kent’s second-wicket pair piled on a stand worth 231.

By stumps and the midpoint of the match Cox had reached a career-best 167 not out while Leaning finished unbeaten on 110 as Kent closed on 338-1 for a narrow six-run lead. Kent vs Sussex scorecard

Libby and D’Oliveira set a new partnership record for Worcestershire for any wicket against their Welsh opponents – 318 – out of a total of 455-8 from their 120 overs and then Ed Barnard dismissed Glamorgan openers Nick Selman and Charlie Hemphrey.

But Carlson and Root batted with plenty of fluency in the final session in each completing half-centuries and their unbroken stand was worth 137 in 44 overs by the close when the Glamorgan total stood on 181-2. Worcs vs Glamorgan scorecard

The South African’s ton, the 31st of his first-class career and his fifth against Leicestershire, helped Derbyshire make 408 in reply to the home side’s 199 all out, with the Foxes reaching two without loss in their second innings. Leics vs Derbys scorecard

Simon Harmer bagged his 18th first-class five-wicket haul for Essex as the hosts helped themselves to a healthy first-innings lead over Surrey.

Off-spinner Harmer, the County Championship’s leading wicket-taker with 83 scalps last year, has now taken 229 wickets since joining Essex at the beginning of the 2017 season as he returned figures of 6-67.

The South African shared the wickets with trusty partner Jamie Porter, who took 4-53, as Surrey were bowled out for 187, in response to Essex’s 262 – a deficit of 75, which rose to 88 in a wicketless four-over twilight burst. Essex vs Surrey scorecard

A century from Tom Moores helped Nottinghamshire take the upper hand over Yorkshire at Trent Bridge.

Moores made a career-best 106 as the hosts were dismissed for 355 just before the close of play, giving them an overall lead of 91 at the halfway stage of the contest. Notts vs Yorks scorecard

Matt Lamb top-scored with 65 as Warwickshire were made to battle hard for a first-innings lead against Gloucestershire at Bristol.