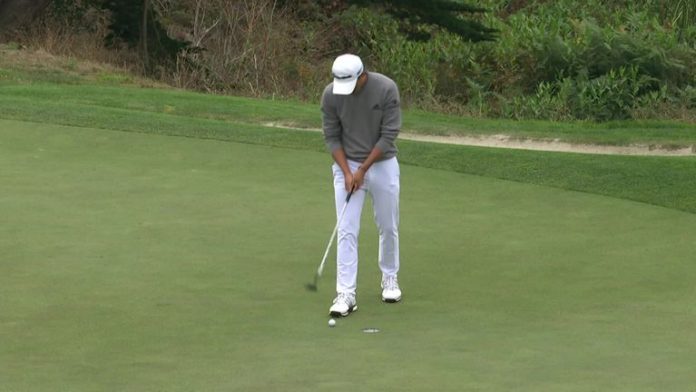 Collin Morikawa fulfilled his rich promise and produced outstanding golf down the stretch to claim a two-shot win at the PGA Championship in only his second major start.

A thrilling final day at TPC Harding Park saw a remarkable number of players in contention, with seven players tied for the lead on 10 under par as the last pairing of Dustin Johnson and Scottie Scheffler entered the final third of the tournament.

But Morikawa broke free of the logjam when he chipped in for birdie at 14 and then drove the green at the par-four 16th to set up a timely eagle, before holding his nerve to negotiate the remaining two holes in par to complete a 64 – the joint-lowest round of the week – and become only the fourth player after Jack Nicklaus, Tiger Woods and Rory McIlroy to lift the Wanamaker Trophy at the age of 23.

Paul Casey, 20 years Morikawa’s senior, ended in a share of second with Johnson after closing with an excellent 66, while the biggest surprise of the final day was Brooks Koepka’s bid for a historic third consecutive PGA win floundering as he stumbled to a 74 to finish 10 shots behind the champion.

Ten years on from his heartbreak at Whistling Straits, overnight-leader Johnson looked favourite to double his major tally when he birdied the first and recovered from a three-putt bogey at the third with another birdie at the fourth before the putts dried up for the 2016 US Open winner.

Johnson had to dig deep to stay in the hunt as the volume of co-leaders continued to mount, with Casey, Scheffler, Tony Finau, Bryson DeChambeau, Cameron Champ, Jason Day, Matthew Wolff and Morikawa all enjoying spells at the top of the leaderboard.

McIlroy: Maybe I’m not as good as I was

Wolff, making his major debut, set a testing target in the clubhouse at 10 under when he birdied the last for a 65, and that score appeared to have a genuine chance of earning at least a place in a play-off until Morikawa took control of the tournament over the last five holes.

The recent Workday Charity Open winner made back-to-back birdies early on at the third and fourth and then holed a clutch 25-footer to save par at the sixth, and he followed another birdie at 10 with a sublime pitch-in for three at the 14th which lifted him to 11 under.

Casey birdied 16 to join the American in the lead, but Morikawa then struck the defining shot of the championship at the same hole, a stunning drive on a bold line which pitched softly and hopped onto the green, rolling out to within seven feet of the flag.

Morikawa read the eagle putt to perfection and suddenly vaulted two clear of the pack, and Casey could not find the birdies he needed at 17 and 18 as the veteran Englishman had to settle for a share of second place – his 10th top-10 finish in his 64 major appearances.

Johnson effectively left himself too much to do when a poor drive at 14 led to his second bogey of the day, although he did well to limit the damage to a five with a gritty two-putt from close to 75 feet, and he required an eagle at 16 to have any hope of catching Morikawa.

A tugged drive and a penalty drop signalled the end of his chances, but he did lift his spirits when he pitched in from 50 yards to get back to 10 under and a birdie at the last capped a 68 and earned a place on the podium alongside Casey.

Finau, DeChambeau and Day all signed for 66s to join Wolff on 10 under, while Scheffler’s 68 got him into the five-way share of fourth ahead of Justin Rose, who bounced back from a double-bogey at the 13th with three birdies over the last four holes to post a 67 and finish on nine under.

Koepka had raised eyebrows with his bullish attitude on Saturday evening, when he made it abundantly clear he felt he was the man to beat, but his comments came back to haunt him as he followed a bogey at the second with three in a row from the seventh to take himself out of the running.

He would also bogey two of the last three to slump to three under alongside Tommy Fleetwood (73), with Rory McIlroy one further back after a 68, while Tiger Woods fired his best round of the championship, a 67, to ensure he would end the 102nd PGA Championship in red numbers.