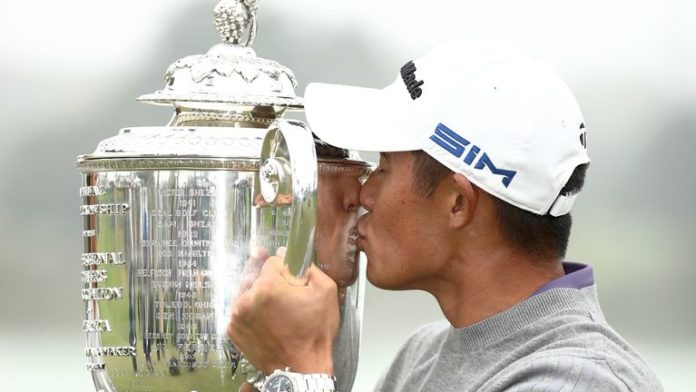 Collin Morikawa was on “Cloud Nine” following his stunning win at the PGA Championship, and the enormity of his success was heightened when NBA star Steph Curry fired the first question at the champion’s press conference.

Despite playing in only his second major championship, Morikawa displayed composure beyond his 23 years as he powered to the top of a heavily-congested leaderboard with some outstanding shot-making over the closing stretch at TPC Harding Park.

With seven players tied for the lead at one point, Morikawa got to 11 under when he chipped in for his fourth birdie of the final day at the 14th, and he then hit the shot of the tournament two holes later as his aggressive drive bounded onto the green and settled seven feet from the flag.

Morikawa, who pipped world No 1 Justin Thomas in a play-off to win the Workday Charity Open last month, converted the chance for eagle and calmly parred the final two holes to wrap up a two-shot victory over Paul Casey and Dustin Johnson.

“I’m on Cloud Nine, I don’t know about you guys, but I’ve believed in myself since day one,” said Morikawa. “I feel very comfortable in this position. It was going to take a very, very good round today, and I knew with the way the leaderboard was looking and everyone up there, you just had to play well.”

The small media gathering were then invited to question the champion, who was delighted that Golden State Warriors legend Curry was first in line.

“I saw you out there on nine and my caddie is a huge Warriors fan, but I’m an LA boy at heart,” he said after Curry enquired as to whether Morikawa was aware of his position over the last few holes.

“But yeah, I do look at leaderboards, I want to know where I’m at. I don’t think it affects me, I think it’s good to know where you’re at. I don’t want to be coming down 18 knowing I need to make par, and trying to force a birdie or doing something stupid.

“When I looked on 12, there was a party of us at 10 under and someone was going to separate themselves, especially with gettable pins on 14, 15 and 16. I knew where I stood stepping onto the 16th tee, and I knew I hit a good shot. I had to hit a good shot, as I was tied with Paul after he just made birdie.”

Morikawa also insisted he relished being in the heat of competition for a major despite his lack of experience, and he played down the lack of atmosphere due to the spectator ban that remains in place until at least the end of the season.

“And for me, it doesn’t stop here. I’ve got a very good taste of what this is like, what a major championship is like. I really do miss the fans, and I know we all had to have some type of adjustment not having fans, but this is where I want to be. I love it.