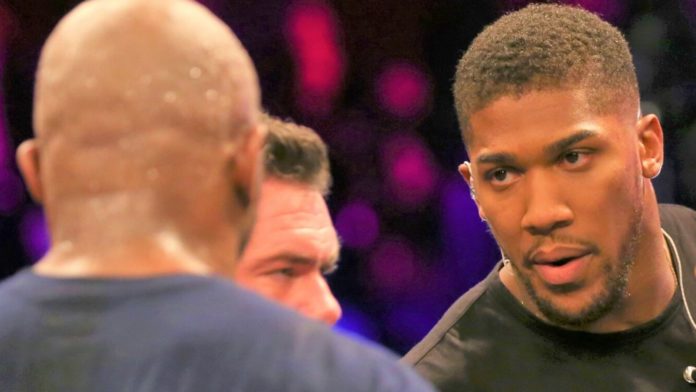 Dillian Whyte has promised a brutal response after Anthony Joshua threatened to ‘give him a punch’ at the Alexander Povetkin fight.

Whyte’s status as the mandatory challenger for the WBC heavyweight title is at stake when he faces Povetkin on August 22, live on Sky Sports Box Office, and unified champion Joshua will be watching from ringside.

The British rivals became embroiled in a heated exchange in the aftermath of Whyte’s explosive rematch win over Derek Chisora in December 2018, and Joshua is relishing the opportunity to resume their bitter feud.

“I might get in there and give him a punch as well,” Joshua told Sky Sports. “You’re getting me psyched up now.”

But Whyte has told Joshua to think again about stepping between the ropes at the finale of ‘Fight Camp’ at Matchroom Boxing’s Brentwood base.

“He might get a box, if he does that,” Whyte told Sky Sports’ Toe 2 Toe podcast.

“If he does that, he might get a box, there and then, one box.

“He thinks it’s a game, but I don’t play games with these guys. They think it’s a game, scream and shout and get in each other’s faces, but if he does, he will get a box.”

Asked if Joshua wants him to lose, Whyte said: “I don’t know and I don’t really care what he thinks or what he believes. I don’t know, it’s hard to say. He says one thing one day and the next day he says something else. There’s no consistency with AJ.

“There’s no consistency with him. He says this, then he says that. He just talks a lot of c**p. I’m sick and tired of all these guys that’s talking, talking, talking all the time.”

The WBC has confirmed the winner of Tyson Fury’s third fight against Deontay Wilder must make a mandatory defence against Whyte next, with promoter Eddie Hearn even suggesting the Brixton man could replace the American as the next challenger.

But Povetkin, Russia’s former WBA champion, stands in the way of Whyte’s plans for huge British battles against Fury and Joshua.

“There’s only three or four big fights out there for me now after this one and I just want to have them.

“The biggest two is Joshua and Fury. If I beat them then I’ve had an amazing career, and that’s what I want to do.”