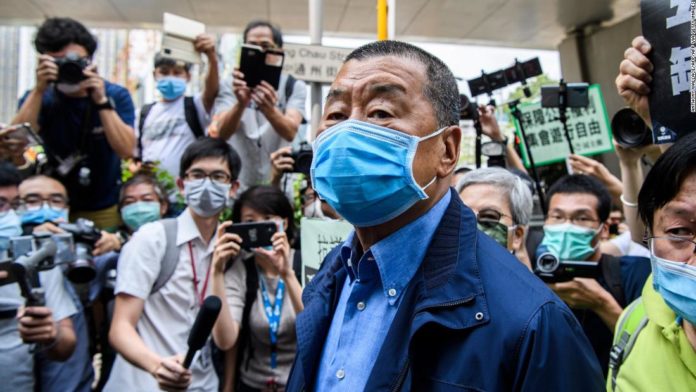 The offense was created by a new national security law imposed on the city by Beijing last month. Lai’s business partner Mark Simon said the tycoon was arrested early Monday.
By Monday afternoon, Hong Kong police had arrested at least nine people, aged 23 to 72, on suspicion of collusion with foreign forces to endanger national security, conspiracy to defraud and other offenses, according to a police statement.
A police spokesman told CNN earlier in the day that Lai was among them and that he had been arrested on suspicion of collusion. The police statement noted that the investigation was continuing and that more arrests could be made.
According to public broadcaster RTHK, those arrested include several top executives at Apple Daily — potentially a major blow to the newspaper’s operations in the city.
A livestream uploaded to Facebook by Apple Daily showed police searching the company’s newsroom. A police spokesperson confirmed to CNN that the agency had a search warrant to enter Apple Daily’s office.
Under the new security law, which was imposed on the city by Beijing last month, the offense of colluding with foreign powers carries a maximum penalty of life imprisonment. Lai has strong ties to Washington and has lobbied for the United States to take a harder line on China. What he has done to contravene the law since it took effect in July is unclear.
This isn’t Lai’s first clash with Hong Kong authorities. He was arrested and faced charges earlier this year in connection with a protest march in August 2019. In June, Lai was charged with inciting people to take part in an unauthorized assembly over an annual candlelight vigil in remembrance of the 1989 Tiananmen Square massacre. The vigil was banned by police this year.
Lai’s latest arrest, though, is among the first since the security law was imposed on July 1. The law criminalized subversion, terrorism and collusion with foreign forces. Late last month, four members of a student-led pro-independence group were arrested for alleged secessionist offenses on social media. Ten people were also arrested during a protest on July 1.
The Hong Kong government has defended the law as necessary to protect national security. It has been denounced by human rights groups, the European Union, and the United States as overly broad and restrictive of the city’s civil liberties.

On Friday, the US Consulate General in Hong Kong and Macao said in a statement that “we have repeatedly raised our grave concerns about the effect this ill-defined, vaguely worded, and far-reaching law would have on Hong Kong.”
Lai’s arrest also comes as tensions between the United State and China over the national security law continue to escalate. Washington imposed sanctions Friday against Hong Kong leader Carrie Lam and 10 other Chinese and Hong Kong officials for undermining the city’s autonomy.
On Monday, Hong Kong Journalists Association chairperson Chris Yeung said that “a month or two ago, nobody could think that in Hong Kong, media organizations could be searched like this.”
“We never thought that this could happen in Hong Kong,” he added. “This is very sad.”
The Foreign Correspondents’ Club in Hong Kong also said it “strongly condemns” the arrest of Lai and the eight others.
“The arrests, and the raid on the newsroom, are a direct assault on Hong Kong’s press freedom and signal a dark new phase in the erosion of the city’s global reputation,” the organization said in a statement. “Today’s events raise worries that such actions are being used to erase basic freedoms in Hong Kong.”

A former clothing magnate, Lai founded Hong Kong’s Apple Daily newspaper in 1995 — two years before Hong Kong was handed over from British to Chinese control. Modeled visually on USA Today, the paper caused a minor revolution in the city’s media landscape, sparking a price war and drastically changing how rivals operated as they struggled to keep up with Lai’s flashy tabloid sensibilities.
While focusing on celebrity gossip and other tabloid fare, since the handover the paper has emerged as one of the fiercest critics of the local government and Beijing. It has openly supported the pro-democracy movement and anti-government protests, printing flyers and posters in its pages that people can cut out and take to marches.
This drove the 71-year-old Lai to a place of prominence within the opposition movement, and made him a figure of loathing for pro-Beijing politicians and media in the city.
Though his media influence has arguably waned in recent years, along with that of the traditional pro-democracy parties, his profile has if anything grown, courtesy of a campaign by Chinese state media to paint him as one of a “gang of four” behind anti-government protests which broke out last year.
Lai’s closeness to right-wing politicians in the United States — he met with Vice President Mike Pence, Secretary of State Mike Pompeo and then National Security Adviser John Bolton in July last year — has been used by Chinese state media to paint the protest movement, along with Apple Daily and similar media, as US-controlled.
The People’s Daily — the official mouthpiece of the Chinese Communist Party — claimed at the time that Lai was part of a quartet of “secretive middlemen and modern traitors,” as Beijing tried to blame the unrest in Hong Kong on foreign forces.
— Isaac Yee and Jenni Marsh contributed reporting.