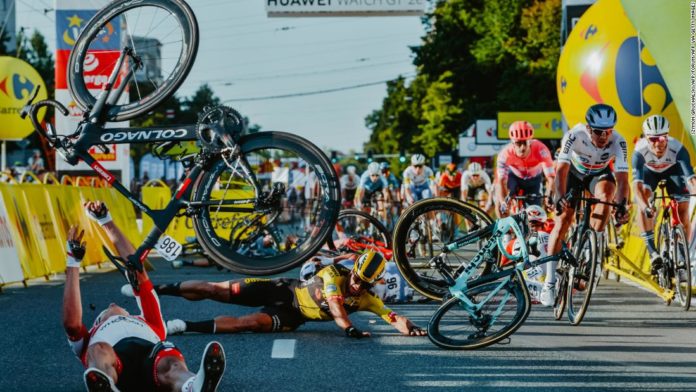 But it is anticipated his road to recovery will be “long and arduous,” with “speaking and eating” likely to be a “challenge in the coming period,” according to his team.
Jakobsen, 23, had been kept in an induced coma after colliding with a barrier during an 80 kilometer-per-hour sprint for the finish line of the first stage of the Tour of Poland in Katowice last Wednesday.
Dylan Groenewegen had drifted into the path of the Dutch cyclist, causing a number of other riders to also crash. A race official also suffered a head injury, according race organizer Czesław Lang.
“His condition is very good, particularly given the seriousness of the incident,” Yvan Vanmol, the team doctor of Jakobsen’s Deceuninck-QuickStep team, told Belgian broadcaster Sporza in an interview on Sunday after visiting the rider in hospital.
Visit CNN.com/sport for more news, videos and features

Jakobsen had been woken up by doctors of the Sosnowiec hospital on Friday afternoon after undergoing five hours of maxillofacial surgery on Thursday night.
The rider “was able to move his legs and arms and communicate with the doctors, which immediately ruled out major neurological problems,” his team said in an statement on its website on Friday.
But his facial injuries are so severe, “speaking and eating will be a challenge in the coming period as the recovery process is expected to be a long and arduous one,” the team added.
Still, his team doctor was optimistic about Jakobsen’s future in the sport.
“Provided no vital organs were hurt, we are of course hopeful for the best,” Vanmol said.
“I am assuming he will become a rider again,” he continued, adding the young Dutchman was “fully awake” and communicating with his team via text messages. He is set to be moved to the Netherlands by the end of this week.
But his team doctor declined to give a timeline for his comeback.
“Our one concern is the aesthetic damage” to his face, and “possibly the activity of the muscles around the mouth,” Vanmol said.

The crash has shocked the cycling world, with the Union Cycliste Internationale (UCI), the sport’s governing body, “strongly” condemning “the dangerous behavior” of Groenewegen in a statement last week.
The UCI said it would refer the incident, which occurred during a 195.8-kilometer stage, to a disciplinary commission, while Groenewegen’s Jumbo-Visma team said it would conduct an internal review of the crash.
Patrick Lefevere, Deceuninck-Quick-Step’s manager, told Belgian newspaper Het Laatste Nieuws last week that he would lodge a complaint to the Polish police about what he called “a very dirty action” by Groenewegen, who was disqualified from the race.
“Been around this game a long time and not sure I’ve seen a crash that horrific,” former US rider Lance Armstrong wrote on Twitter.

Groenewegen gave a tearful interview to Dutch state broadcaster NOS on Friday.
“Let’s be clear that it’s never my intention to endanger other riders,” Groenewegen said. “But this was clearly my fault. I deviated from my line and that is not allowed.”
He said he had barely realized he had broken his collarbone the night after the crash, saying: “All I have been thinking about is Fabio and his family and I hope he recovers soon.”
Jumbo-Visma said Groenewegen won’t be racing pending the UCI investigation.

Lebanon’s PM-designate, named as part of French initiative to save the country, steps down

‘When Lewis is gone, who have you got to look up to?’ asks Hamilton’s half-brother

The “Synergistic Core” of the Human Brain?