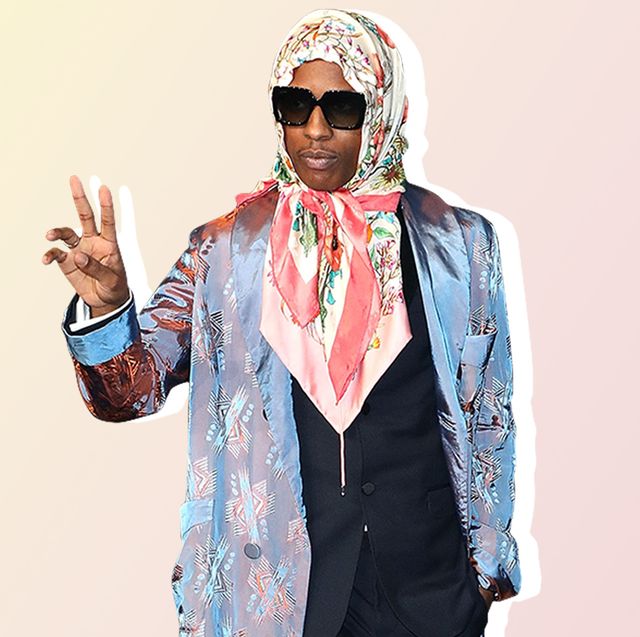 There’s a video I like to rewatch every now and then of A$AP Rocky fucking around in the studio with a few of his (also famous) friends. Right around the 3:30 mark the camera captures Rocky and Lil Yachty, the rapper once instantly recognizable by his signature beaded red tresses, mid-conversation. Rocky, seated, sizes Yachty up for a moment and then starts talking to Yachty about his pants, which, as it turns out, are from the Japanese label Kapital. (To say that Rocky “asks” about them would be a gross misuse of the term, and a disservice to Rocky’s confidence. He doesn’t ask so much as asserts.)

The two start discussing Japan, and Yachty mentions he was there recently, visiting two of the Kapital stores on his trip. “There’s three of them, you know,” Yachty says in a knowing aside. Rocky blinks. “No, there’s four of ’em” he replies, almost pityingly. Sounding chastised, Yachty concedes the point. The conversation goes on. (Sadly, because of the angle, the viewer never gets to see much of said pants beyond their back pockets. What a tease!)

The entire video is worth a watch, if only to revel in Rocky’s casual mastery of menswear’s most au courant reference points. Rocky, of course, comes by his knowledge of menswear arcana honestly. Ever since the Harlem-born artist declared himself that “pretty motherfucker” almost a decade ago, his enthusiasm for fashion has remained an indelible component of his persona, making him one of the industry’s foremost modern champions. (This is man who dedicated an entire song to his fanboy-ish devotion to the beloved Belgian designer Raf Simons.)

In other words, Yachty should’ve known better. It was Rocky, in fact, who helped introduce Kapital to wider audiences stateside, even if it would take a few years for his contemporaries, let alone his fans, to catch on. But that’s par for the course. As the area of overlap in the Venn diagram of music and fashion continues to expand, Rocky’s reputation as a fashion plate—and his penchant for, ah, rocking bold, straight-off-the-runway styles few could pull off better—represents an inextricable part of his appeal.

It’s in no small way thanks to Rocky that this generation of hip-hop talent finds itself more invested in the ins and outs of the fashion industry than any of its predecessors. And as the extended A$AP crew continues to flex its fashion bona fides (and the man himself poses alongside Rihanna as one of the faces of her recently launched skincare line) it seems as appropriate a time as any to take a by-no-means-exhaustive look at some of his biggest fits from the last few years, a period that’s proved a particularly fertile one for Flacko’s always-innovative take on the state of men’s clothing.

This ain’t a purse it’s a satchel!

Performing in a silky button-down and a pair of Needles track pants that would shortly sell out, oh, y’know, everywhere.

Hitting a flea market with friends in 2017. Celebrities: They’re just like us! (Assuming, of course, your friends are Kendall Jenner et al.)

Rocky reigns in a standout cropped fur coat by sticking with black (almost) everywhere else.

When in Milan (or anywhere, really), go with head-to-toe Gucci.

In head-to-toe Gucci once again, this time in his native New York.

High-vis and Vlone: Truly, a combination only Rocky could pull off.

Uncharacteristically subdued, but no less stylish, for Sundance.

A$AP Rocky in Loewe, an act in five parts (with a few brief interludes featuring some other names you’re probably familiar with). One…

Interlude numero cinco, featuring—yet again—our man in, and at, Gucci.

Pro tip: Stepping out to grab coffee is never an excuse to slack off. On the contrary, for Rocky it’s yet another opportunity to flex. (Be like Rocky, people.)