Home Sport ‘I would vote Megan Rapinoe for President!’ 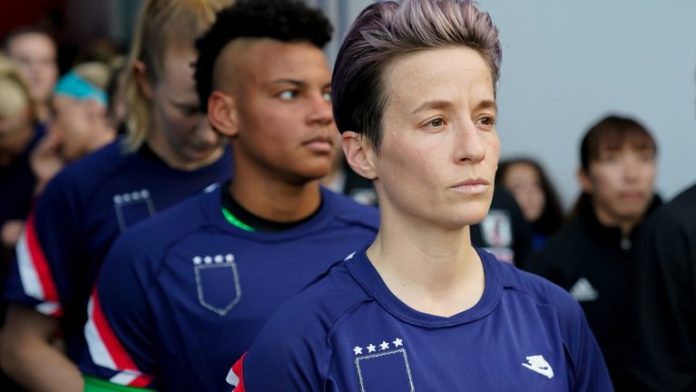 Mewis: “I would vote [Megan] Rapinoe for President right now if they let me. I support her so much and I think being her team-mate has been such a great honour of mine”

Manchester City Women’s latest signing, Sam Mewis, has told Sky Sports News she would vote Megan Rapinoe for President of the United States if she could.

Rapinoe – who back in 2016 knelt in support of NFL player Colin Kaepernick and his protest against racial inequality and police brutality in the US – continues to use her platform to campaign for a better society.

The 35-year-old has been a leading figure in the US Women’s National team players’ fight for pay equal to their male counterparts in the States.

The forward was also famously involved in a Twitter spat with current US president Donald Trump when she emphatically said she would decline an invitation to the White House if they won the 2019 Women’s World Cup.

USA co-captain Rapinoe did indeed lead the team to glory last summer – winning both the Golden Ball and Golden Boot awards – and Mewis says her international colleague is a total inspiration, on and off the field.

“I would vote Rapinoe for President right now if they let me,” she told Sky Sports News after joining City Women on a short-term deal.

“I support her so much and I think being her team-mate has been such a great honour of mine.

“I think on the field – she is obviously so special. There is really no player like her and I think she just led our team in that World Cup (in 2019) so incredibly.

“But then off the field – which in a lot of ways is more important – I think she just stands up for what she believes in and she is not afraid to maybe lose fans by being honest.

“She is just one of the most honest and hard-working and like moral people. She has grown so much in the time I’ve known her and I think she has taken on this role because she knows her voice is going to be heard and she feels that responsibility to stand up for the right things.”