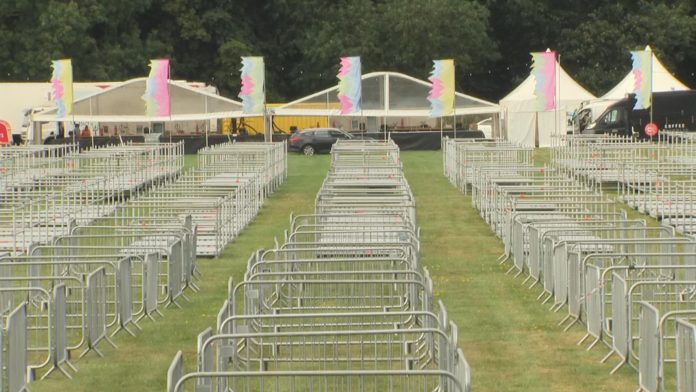 The Virgin Money Unity Arena at Gosforth Park has converted its 45,000-square-metre field into an outdoor arena with 500 platforms socially distanced from one another, to get fans back into live music events while adhering to government guidelines.

Some 2,500 fans are set to watch local musician Sam Fender kick-start the launch at the venue which could otherwise host 40,000 guests.

“At the front people are on the grass and as you gradually get back, the platforms get higher,” promoter Steve Davis explained.

“They’ve all obviously got steps and safety rails around the outside, and they’ll have seats on them as well for people who don’t want to stand up.”

Guests are allocated an arrival time when purchasing tickets and directed to their viewing platforms.

Davis says finding innovative ways to hold concerts safely could give fans a better night out.

“It’s not so abnormal actually, it feels like a VIP experience for everyone, with your friends in your own area and you’re not too far away from the other groups either, so I think some people might enjoy it more than a normal gig.”

The live music industry contributed £4.5 billion to the UK economy last year. But no gigs have taken place since 23 March when lockdown was imposed. It has left many venues facing permanent closure, and half of the industry’s 210,000 jobs at risk.

Elbow, Everything Everything and Public Service Broadcasting are among artists to support Passport: Back to our Roots, a new campaign to raise money for grassroots music venues at risk of closure.

The artists will play one-off, intimate shows at small venues when it is safe to perform with no social distancing.

Everything Everything will return to play at Esquires Bedford years after they first performed there. Lead singer Jonathan Higgins says the loss of small venues would be “catastrophic” for British music.

“Live music is a massive deal in Britain, and we would hate to see it fall on to hard times.”

In July, grassroots venues deemed at immediate risk were given £2.25 million after the government announced a £1.57 billion rescue package for the arts industries.

Indoor venues were told they could resume gigs on 1 August, as long as strict social distancing was in place, but that decision was later reversed.