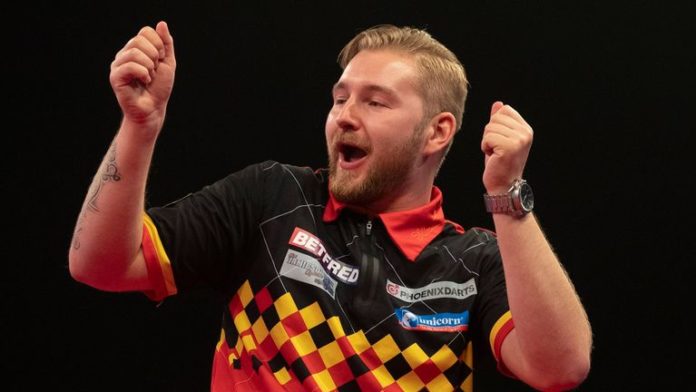 In the second of our series, the newly-crowned World Matchplay champion Dimitri Van den Bergh tells us the story behind his walk-on song and dance.

The World Matchplay took place last month under very different circumstances but one thing that didn’t change was The Dream Maker entertaining everyone watching back home with his smooth dance moves on the stage.

The walk-on has become part of the show and in this series we talk to the players to find out a little bit more about their entrances to the stage that get the party started in arenas all over the world.

Van den Bergh’s walk-on is one that is well known to darts fans as the Belgian takes to the stage to the tune of Happy by Pharrell Williams before performing his trademark dance moves.

He said: “My manager always thought I was a very optimistic person, always laughing, always looking at the bright side, positive, anything like that. Then he heard this song on the radio and he was like, ‘Dimitri, I have found the song for you!’

“So, I put it on and thought, you know what, this feels good, it feels nice, it makes me smile.”

In the video, the Antwerp-born thrower recalls an amusing moment during the 2018 World Cup where his compatriot Kim Huybrechts tried to put on a show of his own as both players entered the stage, and tells us what venue brings out his best moves.

“The World Championship of Darts; when I am on that stage, doing my walk-on and doing my dancing, I think that is the best dancing I have ever done! It all feels even better and the crowd loves it even more. They are supporting me a whole lot more,” he said.

It’s not long to wait until darts is back on Sky Sports, the Premier League returns on Tuesday, August 25 at the Marshall Arena in Milton Keynes with six consecutive nights of action.