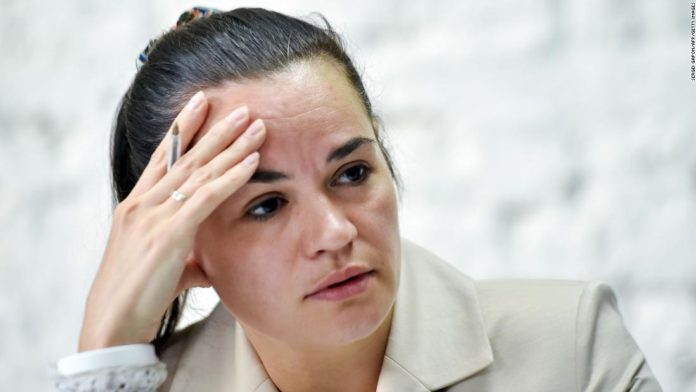 Svetlana Tikhanovskaya, who stood in for her husband as an opposition candidate after he was jailed in the run-up to the vote, is now in neighboring Lithuania, that country’s foreign affairs minister announced Tuesday.
Tikhanovskaya fled after publicly rejecting preliminary election results that handed the longtime Belarusian President Alexander Lukashenko a landslide victory. But many details around her departure are still unclear.
Protests erupted after official exit polls were released late Sunday, granting a sixth term to Lukashenko, who has ruled Belarus for 26 years and earned the nickname “Europe’s last dictator.” Thousands were arrested and the demonstrations resumed on Monday night.
Tikhanovskaya’s campaign and independent observers say the vote was marred with widespread ballot stuffing and falsifications. The independent monitoring group “Honest people” said at Tikhanovskaya’s news conference that according to its data she had won in at least 80 polling stations across Belarus.
On Monday, Tikhanovskaya “left to an unknown location” after filing a complaint with Belarus’ central elections committee demanding a recount of the votes. After spending several hours at the committee alone, she came out and told her lawyer that “she made up her mind” and left the building, according to her campaign.
The campaign could not reach her for several hours before she got in touch to confirm she was safe.

Tikhanovskaya implied in a cryptic video address from Lithuania that she had left Belarus to join her children.
“I thought this campaign strengthened my spirit and gave me so much energy that I could bear it all. But I guess I’m still just that weak woman I was in the beginning,” a visibly distressed Tikhanovskaya said in a short clip posted on her husband Sergey’s YouTube channel.
“I made a very hard decision, I’ve made this decision on my own … and I know that many people will understand me, many will judge me and many will hate me but god forbid you will ever have to face the choice that I had to face.”
A few hours later, a pro-government channel on the messaging app Telegram shared a video of Tikhanovskaya quietly reading from a piece of paper and calling on Belarusians to cease protests. In the video, she insisted that “the nation has made its choice” — a complete reversal from her claim that the election was rigged.
It was unclear where and when the second video had been recorded, but it spurred intense speculation on social media about possible threats that could have been levied against the candidate, forcing her out of the country.
The candidate’s representative Olga Kovalkova told Belarusian outlet TUT.BY on Tuesday that Tikhanovskaya “had no choice,” and said that part of Tikhanovskaya’s team was still being “held hostage.”
Her campaign told CNN on Sunday that nine people associated with the campaign had been arrested. Tikhanovskaya’s husband has been in a detention center since May and the family sent their children abroad before the election following threats they would be placed in an orphanage.
“Svetlana had no choice, the Belarusian authorities took her out of the country,” Kovalkova told TUT.BY. “It is important that she is free and alive. Svetlana’s departure made the release of [campaign manager] Maria Moroz, who was a hostage in this situation, possible and they left together.”
The nine campaigners were arrested for various reasons, including allegedly preparing unauthorized demonstrations, according to police. The Belarusian authorities did not officially acknowledge that Moroz has been released.

Thousands have been arrested since protests began on Sunday and the internet has been shut down for hours at a time.
Most websites and apps have not been loading in the country, so residents have been relying on Telegram, which is accessible via proxy servers, for updates.
“We enabled our anti-censorship tools in Belarus so that Telegram remained available for most users there,” Pavel Durov, Telegram’s founder, who once fled Russia after a conflict with local security services over encryption keys, said in a tweet. “However, the connection is still very unstable as Internet is at times shut off completely in the country.”
While protests have been reported in dozens of cities and towns, the bulk of arrests have occurred in the capital Minsk, where key ring roads and streets were blocked by demonstrators on Monday evening and police deployed tear gas and rubber bullets to disperse crowds.
Analysts said the levels of police violence against protesters was unprecedented. “They have used water cannons, stun grenades, rubber bullets, tear gas,” Alex Kokcharov, a political risk analyst at IHS Markit, who specializes in Belarus, told CNN. “I think the response by the police is to cause some causalities, such as injuries, which would demotivate a lot of people from attending the protests.”
One protester died in Minsk late on Monday, according to the ministry of internal affairs. Novaya Neva reporters on the ground have reported that police threw stun grenades at protesters on Pritytsky Street.
“On August 10 at about 23:00, during the riots in Minsk on Pritytsky street, the crowd built barricades to block the traffic.,” the interior ministry said in a statement. “During the confrontation with the special forces, who arrived to unblock the square, one of the protesters tried to throw an unidentified explosive device at the law enforcement officers. It exploded in his hand,” it added, saying that the protestor died of injuries.
Further repression, including “elements of martial law and more police on the street,” is expected if the protests continue, Kokcharov told CNN.
“I think it is more likely that Lukashenko will repress these protest movements again, he has done it before,” Kokcharov said, in reference to 2010 protests over the President’s winning of a fourth term.
Lukashenko enjoys wide support from the country’s elites, but what would “crack” them “is widespread civic disobedience movement such as long term labor strikes in state-owned enterprises and transportation networks,” Kokcharov added.
A nationwide strike that was promoted on the opposition Telegram channels kicked off on Tuesday. According to videos posted on social media, workers in at least five factories refused to come to work until the government agreed to calls for a recount.
Lukashenko said Monday that he would not “allow the country to be torn apart,” claiming that the protests were initiated by “foreign puppeteers,” Belta reported.
“So Lukashenko — who is at the top of the vertical of power, the head of the state, voluntarily, with 80% of the votes — must transfer power to them? This is all coming from abroad,” he said.
Tikhanovskaya, a former English tutor, became an unexpected rival to Lukashenko, and the face of the opposition after taking over from her husband, Sergey Tikhanovskiy, a popular YouTube blogger and former candidate who has been jailed since May.
Her campaign rallies saw significant turnouts even in small Belarusian towns not known for their protest activity. About 63,000 people attended the largest event in Minsk in July — making it the biggest demonstration in the past decade.
Tikhanovskaya joined forces with two women who ran other opposition campaigns after their candidates were also either barred from running or jailed. Lukashenko dismissed them as “poor girls” in his annual state of the union address last week, and said he would not “give the country away.”