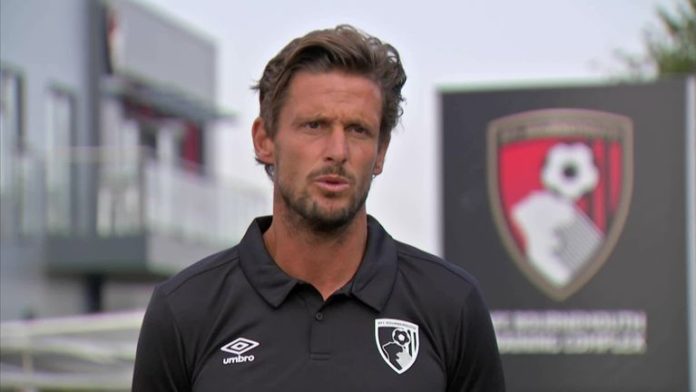 New Bournemouth manager Jason Tindall admits the prospect of losing players is nothing new despite their recent relegation to the Sky Bet Championship and insists there will be no “fire-sale” at the club.

He was replaced by Tindall – Howe’s assistant for 11 years – who is now trying to secure a return to the top-flight at the first time of asking, but his immediate task is holding onto the team’s best players, admitting that he “wouldn’t be sitting here now” if the club had been plotting a fire-sale.

Nathan Ake has already left to join Manchester City, David Brooks and Callum Wilson are both linked with moves away, while Bournemouth have rejected a bid in excess of £12m from Sheffield United for goalkeeper Aaron Ramsdale.

“I think with any club that’s relegated from any division there’s always that speculation with players leaving or being linked with other clubs,” Tindall told Sky Sports News.

“It’s no different to what’s happened at this football club for probably the last three, four or five years. A number of our players are always being linked with moves away, you deal with that as and when it comes around.

“The one thing is, the players know what a good football club it is, it’s a club that wants to get promoted and I think the club is in a healthy position right now.”

Speaking at his first press conference as Cherries manager earlier in the day, he added: “I wouldn’t be sitting here now if I didn’t have assurances.

“If the club had said fire sale, losing eight or nine players, I wouldn’t be sitting here now.”

Tindall also revealed he spoke with Howe after accepting the job.

“We spoke,” Tindall said. “Once Ed made his decision on Saturday morning, we spoke at length on the phone afterwards. We had a private discussion and spoke about moving forward and what that would look like.”

Tindall made 199 appearances for Bournemouth as a player between 1998 and 2011, and was a key part of the club’s coaching staff – helping them rise from League Two to the Premier League in 2015. His son, Levi, plays for the academy.

“It’s an honour and a privilege to be the manager of such a great football club,” Tindall told afcbTV earlier this week.

“Given the success of the club over the last 12 years, with Eddie in charge and me by his side, I’m not going to come in and rip everything up and start again. I would be a fool to do that.

“But I’m my own person with my own ideas and I will be looking to implement them as soon as we get back on the training ground.

“I know the Championship is a very tough league but my aim is to get this club back into the Premier League at the first time of asking.

“This is a challenge that I feel I’m ready for and one I’m looking forward to.”