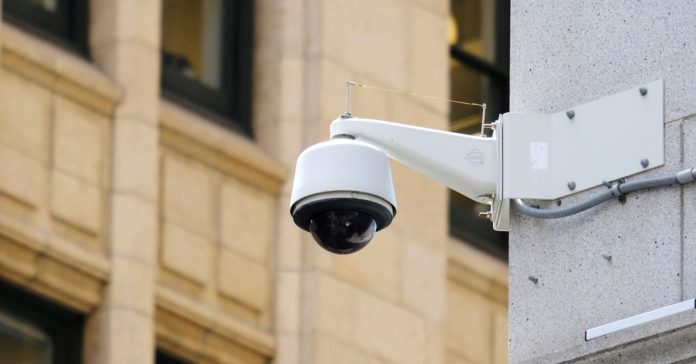 The US is home to an estimated 50 million closed-circuit TV cameras, roughly as many per capita as China. Many are owned by people or companies, not the government. But many police departments can gain access to the images through partnerships with private companies that trouble some civil rights activists.

Newark, Baltimore, San Francisco, and Detroit each have some form of public-private camera system. Each is different. In Newark, for example, residents are encouraged to view CCTV footage themselves and report crimes to law enforcement. Police laud these systems for reducing crime in neighborhoods burdened by violence. A Baltimore cop likened that city’s system to “spidey senses.”

But civil rights activists warn that once installed, the cameras often are used for other tasks, like monitoring protests, and can become a system of warrantless surveillance. particularly for communities of color.

In 2016, Detroit police observed a startling pattern in the city. Not only was crime rising, it increased fastest near gas stations. One-fourth of all violent crimes in the city between 10 pm and 8 am occurred within 500 feet of a gas station. Police contacted eight gas stations, installing CCTV cameras that streamed real-time footage directly to police. Livestreaming allowed for faster response times and “virtual patrols,” where officers scanned camera footage during late night hours.

Since that pilot, Detroit PD has expanded the network, calling it Project Green Light. In four years, Project Green Light has grown to 700 cameras at 500 businesses throughout the city. But the expansion worries activists who say the police use it for more than patrolling gas stations. Last year, Mayor Mike Duggan announced plans to add traffic cameras to Project Green Light, bringing the total to more than 1,000 cameras.

Businesses pay to buy and install the cameras, but the Detroit PD has reportedly spent roughly $8 million on the Project Green Light system, including the costs of city-owned cameras, contracts with vendors, and the Real Time Crime Center, where staff monitor footage and coordinate police response.

“That’s the first thing that we want to take money out of, Project Green Light and facial-recognition technology,” says Lloyd Simpson, an organizer for Detroit Will Breathe, an activist group.

Simpson argues that the resources spent on Project Green Light would be better spent elsewhere. As CCTV footage is used for reasons beyond the original scope, the change in focus distracts from the question of whether policing itself is effective in stopping crime.

In April, police used footage from Project Green Light to monitor compliance with social-distancing rules aimed at deterring the spread of coronavirus. Officers paired the footage with risk terrain modeling, an algorithmic approach to crime prediction, issuing 35 tickets as a result of its virtual patrols.

“You can’t separate where the cameras are placed from how society views Black communities to begin with,” says Eric Williams, senior staff attorney at the Detroit Justice Center, a nonprofit law firm. “The placement of the cameras is not uninfected by the racism that pervades our criminal justice system.” He notes that more than 80 percent of Detroit residents are Black, adding that “it’s well established that there are deficiencies in the technology when it comes to accurately identifying people with darker complexions, particularly women of color.”

The Detroit Police Department did not respond to requests for comment.

Contrasting Detroit’s more policing-centric approach to cameras is San Francisco. Since 2012, cryptocurrency mogul Chris Larsen has spent more than $4 million to help install more than 1,000 cameras in city neighborhoods, including the busy Union Square Business Improvement District (BID). The San Francisco Police Department maintains a database of the cameras, their owners, and their locations, reaching out to request footage if they suspect a crime.