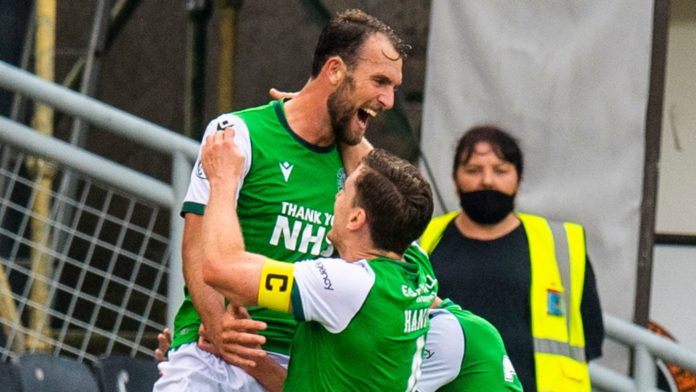 Hibernian continued their 100 per cent start to the Scottish Premiership season with a narrow 1-0 victory at Dundee United.

The first 45 minutes was a drab affair, with little in the way of goalmouth action, before Christian Doidge grabbed the only goal of the game in a similarly dull second half, lashing home left-footed at the near post (65).

The result means Hibs are top of the Scottish Premiership after three games, but could be overtaken if Rangers win by two goals against St Johnstone on Wednesday, while Dundee Utd sit fifth with four points from three games.

Man of the match: Christian Doidge

How Hibs squeezed past Dundee Utd

In a listless opening 45 minutes, Hibs did have more of the ball in Dundee United’s half, but the end product was not good enough.

In the only event of note from the first half, Paul McGinn and Jamie Robson were involved in a nasty clash of heads, resulting in the latter being subbed off after just nine minutes.

Dundee Utd had the first big chance of the game with Manchester City loanee Luke Bolton doing superbly on the right before pulling back for Ian Harkes, but the American lashed wide with a snatched effort.

Then came the only goal of the game, in controversial circumstances. Alex Gogic’s hopeful ball into the box fell to Josh Doig at the far post, and his mis-hit fell fortuitously into the path of Doidge. The forward did superbly from a tight angle, lashing into the top left corner past Benjamin Siegrist, but replays showed Doig was just offside in the build-up.

For Dundee Utd, Logan Chalmers was replaced by Nicky Clark in the only change from the 1-0 win at Motherwell, while Hibs were unchanged following their 4-1 win at Livingston on Saturday.

The hosts huffed and puffed looking for a leveller, and did have a fine chance to level late on through Peter Pawlett, but he snatched at a volley when one-on-one with Ofir Marciano, lashing wide from 10 yards.

Dundee Utd boss Micky Mellon: “I’m frustrated because it was a game of very few chances. First half we could have done better in the final third, but in the second half we did that much better.

Apart form a wee spell when they got their goal, we did everything I’d have asked them to do. It’s a step up for us, we’re matching that now, but at times we have to be better in the final third.”

Hibs boss Jack Ross: “Christian is a brilliant asset to me, he’s so unselfish with his work and his goalscoring record.

“We wanted to build momentum, we looked at the early fixtures, we set our targets, we’ve just got to keep doing that and building monumentem, while recognising what we need to build on, but it’s a fantastic start.”