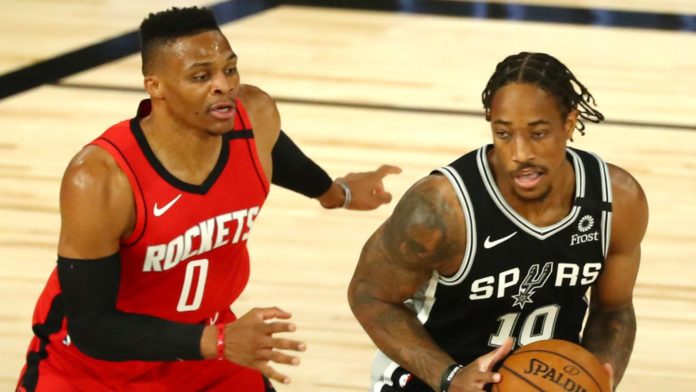 DeMar DeRozan and Keldon Johnson combined for 47 points as the San Antonio Spurs hammered the Houston Rockets to keep their playoff hopes alive.

DeMar DeRozan scored 23 points and Keldon Johnson had 24 points and 11 rebounds, both career-highs, as the San Antonio Spurs rolled to a 123-105 win over the short-handed Houston Rockets in a key NBA seeding game.

The win allowed the Spurs (32-38) to remain in the hunt for a spot in a play-in tournament for the Western Conference’s final postseason spot.

Portland, San Antonio and Phoenix are all chasing Memphis, with the team that finishes the restart in ninth place earning a chance to play the eighth-place squad for a berth in the playoffs.

San Antonio, who have won three straight games and are 5-2 in the NBA bubble, led by 17 points at half-time and by as many as 24 in the third quarter on the way to a 98-78 advantage heading into the final period.

Jakob Poeltl also had a double-double with 14 points and 12 rebounds for San Antonio, with Rudy Gay and Marco Belinelli scoring 13 each, Lonnie Walker IV hitting for 12 points, and Dejounte Murray contributing 11 points.

Houston (44-26) have already clinched a postseason berth but after the loss can finish no higher than fourth in the West standings.

The Rockets, who have won four of their six games in the restart, played without leading scorer James Harden (who was held out for rest) and Eric Gordon (ankle).

Timothe Luwawu-Cabarrot and Jeremiah Martin each scored 24 points and the Brooklyn Nets took control early in a 108-96 victory against the Orlando Magic.

Luwawu-Cabarrot has excelled in the league’s restart and finished with his seventh career 20-point game – his third since the season recommenced on July 31. A week after scoring a career-high 26 in Brooklyn’s stunning win over the Milwaukee Bucks, he played only in the first and third quarters and tallied four three-pointers and seven rebounds.

Martin, who signed a two-way contract with Brooklyn in January, scored half of his points in the fourth quarter. He added six assists.

Dzanan Musa added a career-best 17 points as the Nets (35-36) shot 42.7 per cent and improved to 5-2 in the seeding games. Tyler Johnson contributed 14 and Lance Thomas chipped in 12 for Brooklyn, who led by double digits for the final 38-plus minutes.

Markelle Fultz and Wes Iwundu paced Orlando with 18 points apiece but the Magic shot 29.5 per cent in the first half and 38.6 per cent overall. Nikola Vucevic was held to 12 points and 10 rebounds and shot 5-of-15 from the floor.

Luwawu-Cabarrot scored 17 points and the Nets ended the opening quarter on a 21-5 burst over the final five-plus minutes to take a 34-22 lead. Martin scored 12 points in the second as the Nets continued to dominate and opened a 60-43 half-time lead.