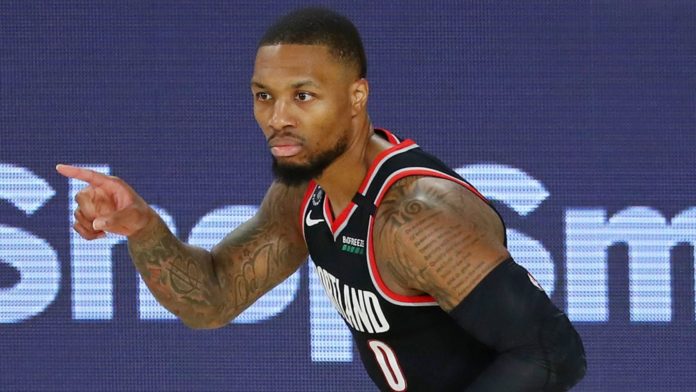 Damian Lillard scored a career-high-equalling 61 points to lead Portland to a critical win over the Dallas Mavericks that lifted the Trail Blazers into eighth place in the Western Conference standings.

Damian Lillard scored a career-high-equalling 61 points and assisted Hassan Whiteside on what proved to be the game-winning dunk in the Portland Trail Blazers’ 134-131 victory over the Dallas Mavericks on Tuesday night.

On a night in which Lillard also became the first player in Portland franchise history to score 50-plus points in consecutive games, the guard’s most critical play may have come on defense. Lillard drew an offensive line on Dallas’ Trey Burke with 4.5 seconds remaining and the Trail Blazers (34-39) leading 132-131.

Moments after Burke bumped Lillard down to the floor, he dished to a wide-open Dorian Finney-Smith, whose made corner three-pointer was waved off.

Portland took the lead with 59.1 seconds left when Lillard dished his eighth assist of the night for two of Whiteside’s eight points. The basket marked the culmination of a back-and-forth fourth quarter in which neither team led by more than five points.

Helping Lillard shoulder the offensive load was Carmelo Anthony, who scored 26 points on 10-of-17 shooting from the floor and 3-of-5 from behind the three-point line. Anthony and Lillard combined for 12 of Portland’s 15 made three-pointers.

Dallas (43-31) shot a blistering 20-of-44 from three-point range, with Kristaps Porzingis going 7-of-9 en route to a team-high 36 points before fouling out. Luka Doncic added 25 points with 10 assists and eight rebounds for the Mavericks, while Tim Hardaway Jr finished with 24 points.

With the win, the Trail Blazers remain ahead of the Phoenix Suns, who won earlier on Tuesday over Philadelphia, to remain in position for the Western Conference’s final playoff spot.

A win against Brooklyn on Thursday guarantees Portland a place in a play-in tournament for the West’s eighth seed.

Devin Booker had 35 points, nine rebounds and seven assists to lead the surging Phoenix Suns past the Philadelphia 76ers 130-117.

Mikal Bridges added 24 points, Dario Saric contributed 18 and Ricky Rubio had 16 points and 10 assists as the Suns moved to 7-0 in the bubble. The Suns (33-39) tied the Memphis Grizzlies for ninth place in the Western Conference. Phoenix are still alive to participate in the play-in bracket to potentially earn a playoff spot for the first time in 10 years.

In the first half, the Suns shot 54 per and took a 63-58 lead into the locker room at half-time. In the third quarter, Saric drained with a trey and Frank Kaminsky threw down a dunk after a Sixers turnover for a 95-84 advantage with 1:31 left in the third.

After the Sixers whittled the deficit to 105-102 in the final period, the Suns reeled off eight in a row for an 113-102 advantage with 5:47 to go. Booker connected on consecutive baskets in the paint for a 119-107 lead with 4:05 remaining. It was more than enough of a cushion to propel the Suns to another victory.

Tatum and Walker combined to shoot 17-of-23 from the floor as the Celtics (48-23) won their fourth straight game. Walker’s 19 points were the most he has scored in six games since the season restart.

Ja Morant had 26 points and 13 assists, and Jonas Valanciunas (14 points, 10 rebounds) also had a double-double for the Grizzlies (33-39), who lost their grip on the eighth seed in the Western Conference with their sixth defeat in seven seeding games.

The Grizzlies cut a 16-point deficit at half-time down to eight 61-53 on a three-point play from Gorgui Dieng with 7:43 left in the third quarter. The Celtics responded with a 10-3 run to regain control and maintained a double-digit lead at 83-73 heading into the fourth.

Memphis was back within 88-78 with just over 10 minutes remaining before Grant Williams and Brad Wanamaker nailed threes for a 94-80 Boston edge. The Grizzlies failed to get back within single digits the rest of the way, trailing by as much as 20 down the stretch.

DeMar DeRozan scored 23 points and Keldon Johnson had 24 points and 11 rebounds, both career-highs, as the San Antonio Spurs rolled to a 123-105 win over the short-handed Houston Rockets in a key NBA seeding game.

The win allowed the Spurs (32-38) to remain in the hunt for a spot in a play-in tournament for the Western Conference’s final postseason spot.

San Antonio, who have won three straight games and are 5-2 in the NBA bubble, led by 17 points at half-time and by as many as 24 in the third quarter on the way to a 98-78 advantage heading into the final period.

Jakob Poeltl also had a double-double with 14 points and 12 rebounds for San Antonio, with Rudy Gay and Marco Belinelli scoring 13 each, Lonnie Walker IV hitting for 12 points, and Dejounte Murray contributing 11 points.

Giannis Antetokounmpo was ejected in the second quarter for head-butting Moritz Wagner, but the Milwaukee Bucks still posted a 126-113 victory over the Washington Wizards.

The incident occurred near the Milwaukee hoop after Antetokounmpo was whistled for a charging foul for running into the Washington center. The two jawed briefly before Antetokounmpo lowered his head and somewhat gently drove his forehead into Wagner’s left temple. Neither player was injured, and Antetokounmpo was ejected immediately. The run-in occurred with 8:50 remaining in the first half and Milwaukee leading 35-25. Antetokounmpo finished with 12 points and a game-high nine rebounds in just 10 minutes.

Rui Hachimura had 20 points to pace Washington (24-47), who lost their seventh straight since the restart.

Milwaukee never trailed in the game, leading by as many as eight in the first quarter and 16 in the second before coasting through the second half. Brook Lopez led all scorers with 24 points for Milwaukee. Sterling Brown added 23 points, Frank Mason 19, DJ Wilson 11 and Pat Connaughton 10 for the Bucks.

Ish Smith backed Hachimura with 19 points off the bench for Washington. Jerome Robinson chipped in with 15 points, Thomas Bryant 13, and Isaac Bonga and Anzejs Pasecniks 10 apiece for the Wizards.

Bogdan Bogdanovic scored 16, Nemanja Bjelica added 13, Harry Giles III had 12 points and 11 rebounds, Jabari Parker scored 12, and Buddy Hield scored 11 to lead the Kings (30-41), whose only two victories during the restart have come against the Pelicans.

A combination of minor injuries and a desire to give younger players expanded playing time led New Orleans to sit starters Zion Williamson (knee), Brandon Ingram (knee), Jrue Holiday (elbow) and Derrick Favors as well as JJ Redick, who led the team with 31 points against San Antonio on Sunday.

The Kings led by one point after a first half that featured 23 lead changes. The third quarter was much different as Sacramento never trailed and led by as many as 13 points before holding a 94-84 lead at the end of the period.

New Orleans got within 110-106 on Jackson’s basket with 31 seconds left, but Bjelica made two free throws and New Orleans didn’t score again.

Timothe Luwawu-Cabarrot and Jeremiah Martin each scored 24 points and the Brooklyn Nets took control early in a 108-96 victory against the Orlando Magic.

Markelle Fultz and Wes Iwundu paced Orlando with 18 points apiece but the Magic shot 29.5 per cent in the first half and 38.6 per cent overall. Nikola Vucevic was held to 12 points and 10 rebounds and shot 5-of-15 from the floor.

Luwawu-Cabarrot scored 17 points and the Nets ended the opening quarter on a 21-5 burst over the final five-plus minutes to take a 34-22 lead. Martin scored 12 points in the second as the Nets continued to dominate and opened a 60-43 half-time lead.