Home Top News Teaming up to defend against locusts 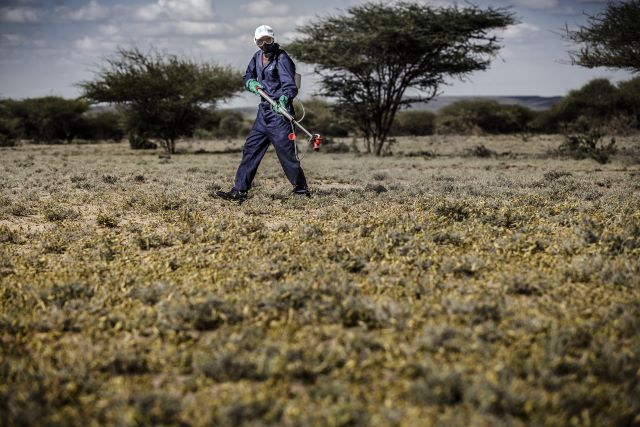 In West Africa, countries are sharing pesticides and other supplies, rather than overstocking

With desert locusts ravaging large swathes of East Africa in recent months, concerns have been rising that swarms could turn their sights westward and invade countries such as Chad, Niger, Mali and Mauritania. FAO anticipated this risk in an updated Desert Locust Crisis Appeal launched in May, and immediately engaged with governments to mobilize surveillance and control teams across West Africa to preempt a potential invasion of the crop-devouring pest.

So far, favorable rains in Eastern Africa are keeping the locusts there and West Africa remains locust free. But if conditions change, the ravenous insects could leave their traditional summer breeding areas and head toward the Sahel in search of greener pastures.

This would be a shock that a region already coping with rising levels of hunger could ill afford. The last time West Africa was hit by a locust invasion in 2003-05 it affected more than 8 million people, caused severe food shortages that drove up market prices and conflict over limited resources. An analysis after the fact showed that if the locust invasion had been controlled more quickly and reduced losses by just 10 percent, some USD 226 million worth of crops could have been saved. The cost to bring that crisis under control, more than USD 500 million, is equivalent to 170 years of preventive control.

An important part of FAO’s anticipatory action in West Africa and the Sahel – meant to prevent a further drop in food security for millions of people already struggling to feed themselves across the region – is to preposition the pesticides needed to stop swarms in their tracks.

If conditions do drive the locusts to move west, they will move fast, and countries in the region need to have the supplies on hand now, before that threat might materialize.

But it is not always possible to purchase the full quantity of pesticide needed for large-scale spray operations like these quickly, particularly with COVID-19 causing slowdowns in supplies and with already high demand for locust-fighting materiel in East Africa and Southwest Asia.

“It’s been encouraging to see the countries of the region working together so closely to prepare for a potential desert locust infestation and to share their resources so that high-risk countries are ready to act rapidly if swarms invade,” says Coumba Sow, FAO’s Resilience Coordinator for West Africa and the Sahel. “We’ve seen in East Africa how quickly locusts can affect an entire region, so acting early and collectively is vital to protecting the food security and livelihood of millions of people in West Africa and the Sahel.”

Algeria and Morocco have together made some 90 000 liters of pesticides available to the high-risk countries Chad, Mali, Mauritania and Niger, which can be used for ground or air operations. Without these timely pesticide interventions, thousands of acres of farmland are at risk of being destroyed by swarms that can eat as much food as 35 000 people in a single day.

The coronavirus epidemic is adding extra urgency, as its knock-on effects on supply chains are already limiting people’s access to food, in addition to agriculture inputs across the region.

A smarter way to manage necessary, but toxic, tools

When locust swarms reach sizes like those currently afflicting eastern Africa, chemical pesticides remain the most effective option for combatting them. Careful management and use are critical to safeguarding human, animal, and environmental health alike.

The triangulation approach offers a way to better manage regional stocks of these pesticides.

“By using one country’s available stocks of pesticides to help another, we’re also avoiding those stocks from getting old, ineffective or potentially harmful to the environment,” according to Mohamed Lemine Hamouny, Executive Secretary of FAO’s Commission for Controlling the desert locust in the Western Region (CLCPRO). He adds that all rotated pesticides go through a rigorous testing process before they get sent abroad, noting: “It’s the smart way to use already available resources where they’re needed most and restock later.”

Another part of the process is identifying sensitive ecosystems, such as wetlands, that cannot safely be sprayed with pesticides and working with local environmental officers to find alternative solutions to treat these areas. To this end, FAO has been expanding maps of sensitive areas and procured biopesticides to promote their use in the target countries in West Africa.

Food insecurity already cause for worry

The latest food security analysis for the region published in March 2020 projects that some 17.2 million people will face severe acute food insecurity during the next lean season from June–August 2020. In addition to Chad, Mali, Mauritania and Niger this also includes Burkina Faso, Cameroon, the Gambia, Nigeria and Senegal. Because all of these countries could be at risk of locust infestation if swarms get a foothold in the four high-risk countries of the region, FAO is preparing surveillance and control operations all across the region.

In all, FAO and its partners on the ground are prepared to survey some 10 million ha of land and target 300 000 to 500 000 ha with control operations.

More on FAO and the desert locust crisis